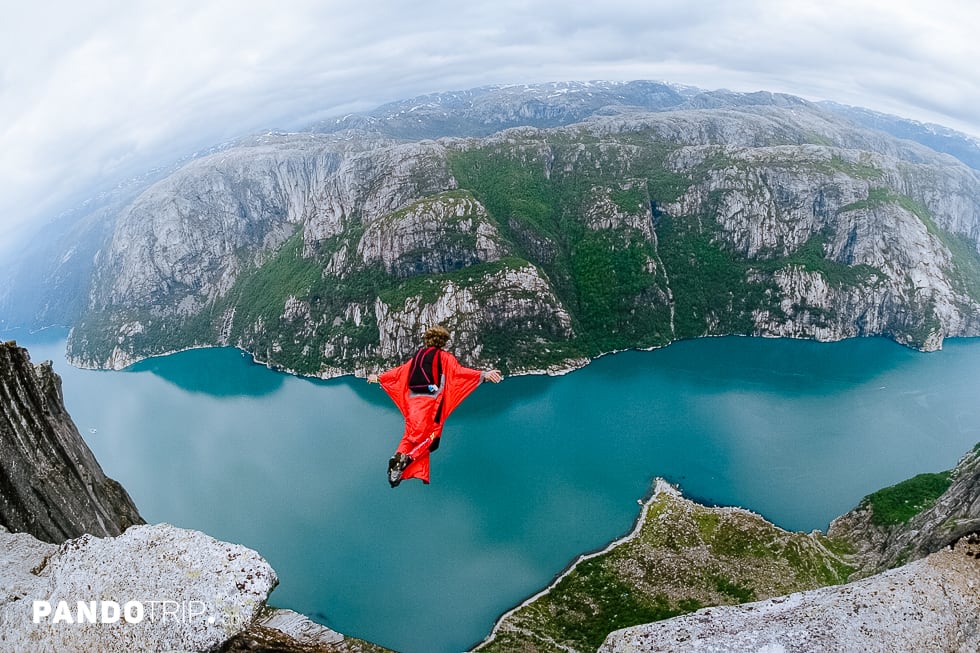 Are you a flying enthusiast looking for the best BASE Jumps around the globe? From the USA, Venezuela, and the UAE, to Norway, Italy, and Greece, here are the best BASE jumping locations for all adrenaline-seekers out there.

What is BASE jumping?

Does BASE jumping sound familiar? Then you already know what it means. In case you don’t, B.A.S.E stands for Building, Antenna, Span, and Earth, the four most common fixed objects adventurers like to parachute from. In short, the world’s most dangerous sports activity.

Often people confuse BASE jumping with skydiving because they both involve jumping and parachuting with a parachute that looks similar when it’s open. However, the difference is huge.

Skydiving involves jumping from a moving object (airplane, helicopter) with a parachute and a reserve. BASE jumpers, on the other hand, jump from fixed objects using a one-parachute system. Some of them wear wingsuits.

Talk about an adrenaline rush? While skydivers open their chutes at around 2,000 feet (609.6 meters), the minimum BASE jump height is around 200 feet (60.96 meters). This means that BASE jumpers have around 15 seconds to deploy their parachutes and land safely.

This activity is near suicidal, which is why it is illegal in most places.

Still, looking for the most thrilling heights to jump from? Here are the top 10 best places to BASE jump.

Angel Falls in Canaima National Park, Venezuela, is the highest waterfall in the world. With 3212 feet (979 meters) in height, and a plunge of 2648 feet (807 meters), it is the perfect destination for BASE jumpers.

Getting to Angel Falls is a little tricky. The best way to get there is to book a river cruise from Canaima town to get deep inside the rainforest. The journey is strenuous, with lots of hours hiking or horseback riding, and it requires a strong fitness level.

But once you reach the summit of the tabletop mountain (Auyán-tepui), look down the waterfall, and jump off the rocky cliff, you’ll know the trip was well worth it.

Is it legal to BASE jump off Angel Falls?

BASE jumping is legal throughout all of Venezuela, but you need a permit to BASE jump Angel Falls as they are located within a national park.

Angel Falls BASE jumping is hazardous due to unpredictable wind and crashing water. Take extra caution when jumping off the highest waterfall in the world.

Besides being a popular hiking and climbing location, Kjerag is one of the world’s most active sites for base jumping. With high cliffs plunging 3,228 ft (984 meters) almost straight down to the fjord, Kjerag is the ultimate BASE jumping spot for both beginners and experienced BASE jumpers.

The spectacular views of the 3,640 ft (1,110-metre) tall mountain attract people from all over the world. Some even climb up the mountain just to take photos. A fascinating part of the Kjerag mountain are the Kjeragfossen waterfalls, one of the tallest in the world. It has seen over 57 000 jumps in the last two decades.

Is it legal to BASE jump off Kjerag?

Kjerag is the biggest BASE drop zone in the world, and BASE jumping is still legal here. Although safer than most BASE jump places, this doesn’t mean that BASE jumping accidents are rare. They happen every year.

Monte Brento, near Lake Garda in Northern Italy, stands 5,000 feet (1,524 meters) above the Sarca Valley. Despite its extreme heights, it is the most accessible BASE jumping cliff in the world. As such, it is a haven for all BASE jumpers.

With a 1200 meter elevation, the overhanging wall is perfect for beginners. Even expert BASE jumpers do their training here.

Monte Brento sees over 15,000 BASE jumps each year, making it the most popular spot for this sports activity. Keep in mind that BASE jumping in Italy is a little trickier compared to the technical BASE jumps in most European countries like Switzerland, for instance.

If you are new to European BASE jumping, it’s best to join the Brento Expedition and make the most of the big wall experience.

Is it legal to BASE jump of Monte Brento?

BASE Jumping from Monte Brento is legal. Whether you are an experienced jumper or a beginner, you have to follow the ‘self-regulation’ rules the local authorities established to protect jumpers.

Perrine Bridge in Twin Falls, Idaho is one of the most adventurous places to visit in the USA. There are many sites in the US with a similar breathtaking view, but nothing compares to leaping into the Snake River Canyon with a three-second free fall before opening your parachute.

Perrine Bridge height is over 480 ft (146 meters), more than enough to rock your boat. But here is the best part. You don’t have to be an experienced jumper to take part in the heart-pounding activity. Tandem BASE offers non-experienced jumpers the experience of a lifetime.

Is it legal to BASE jump off Perrine Bridge?

Fortunately, BASE jumping from Perrine Bridge is legal. In fact, it’s the only site in the US where you can base jump without a permit.

If you’ve ever been to Switzerland, then you know how breathtaking nature is there. And the Swiss know how to make the most out of nature’s beauty.

A common sports activity in Switzerland is BASE jumping. One of the most popular sites is Lauterbrunnen, the Valley of 72 waterfalls, first discovered by jumpers in the late 1980s.

With glacial waterfalls, rock cliffs, greenery, numerous hiking trails, and ski slopes, it is no surprise it is one of the most popular destinations in Switzerland. Some cliffs in the valley reach up to 1640 feet (500 meters) height, perfect for base-jumpers in the pursuit of adrenalin.

Is it legal to BASE jump in Lauterbrunnen?

While you are not breaking the law to BASE jump in Switzerland, there are still rules and regulations to follow. This includes jumping only at marked points and respecting the airspace of other flying enthusiasts like paragliders and skydivers.

Moreover, the Swiss BASE Association demands each jumper to purchase a Landing Card, which costs around $25. The reason for this is to compensate farmers for lost silage when grass gets trampled.

Navagio Beach, also known as Shipwreck Beach in Zakynthos, is one of the most photographed beaches in the Ionian Islands of Greece. Besides its clear aquamarine waters and white sand beaches, the beach is a popular destination for BASE jumpers.

You can access the beach only by boat. Since there is no way to climb up the rugged cliff, the jumping point, which is 650 feet (198 meters) from the ground, can be reached by car. BASE jumpers have two to five seconds to open their parachutes and land safely on the beach.

Is it legal to BASE jump at Navagio beach?

It is not legal to base jump at Navagio Beach in Greece. The beach falls under a national marine park jurisdiction where jumping or diving from cliffs surrounding the beach is strictly forbidden.

Surrounded by breathtaking landscapes and views, this engineering marvel has been a popular site for many sports activities, including BASE jumping. However, leaping off the bridge is permitted only on Bridge day, which happens once in October every year.

Is it legal to BASE jump off the New River Gorge Bridge?

BASE jumping off the New River Gorge Bridge is only permitted on Bridge Day, which takes place every third Saturday of October.

Dubai’s tallest skyscraper, Burj Khalifa, is undoubtedly one of the most photographed sites in the desert metropolis. With a total height of 2,722 feet (829.8 meters), the Burj Khalifa is every BASE jumper’s dream.

On 21 April 2014, leaping off the highest building in the world became a dream come true for French BASE jumpers Fred Fugen and Vince Reffet. With that jump, they entered into the Guinness book of world records for the highest BASE jump from a building.

Can you BASE jump off the Burj Khalifa?

BASE jumping off the Burj Khalifa is only permitted on exceptional occasions. You need special permission which is only granted to true professionals.

Romsdalen Valley is home to the most popular BASE jumping spot in Norway, the Troll Wall.

The Norwegian mountain has been a hotspot for BASE jumpers since the 1980s when Finnish skydivers Jorma Öster leaped off the 2624 feet (800 meters) tall exit point of Bruraskaret.

Standing about 3,600 feet (1,100 meters) tall, the Troll Wall is Europe’s tallest vertical rock face. After the “father” of BASE jumping, Carl Boenish, died shortly after setting the world record for the highest base jump in history, the Troll Wall area was prohibited for BASE jumping.

Still, this hasn’t stopped adrenalin junkies from leaping off the mountain, especially when it is easy to access the summit.

Is it legal to BASE jump off Troll Wall?

BASE jumping from the Troll Wall has been illegal since 1986.

Yosemite National Park is the place modern BASE jumping was born, with the most common jump sites being El Capitan, Half Dome, and Glacier Point. California skydivers Michael Pelkey and Brian Schubert made the first BASE jump in 1966 off the El Capitan, a sheer rock granite rising 3,000 feet (914 meters) from the floor of Yosemite Valley.

Twelve years later, a California skydiver named Carl Boenish organized a group of skydivers to parachute jump from El Capitan. After this, Carl became known as the “father” of modern BASE jumping.

Is BASE jumping legal in Yosemite?

BASE jumping in Yosemite was allowed in the late 1970s. Jumpers required a special permit to jump from El Capitan, which was issued by the NPS.

However, this only lasted for three months due to the program being abused by unauthorized jumpers.

Despite the ban, there are over a hundred illegal jumps per year in Yosemite, often at night or dawn.