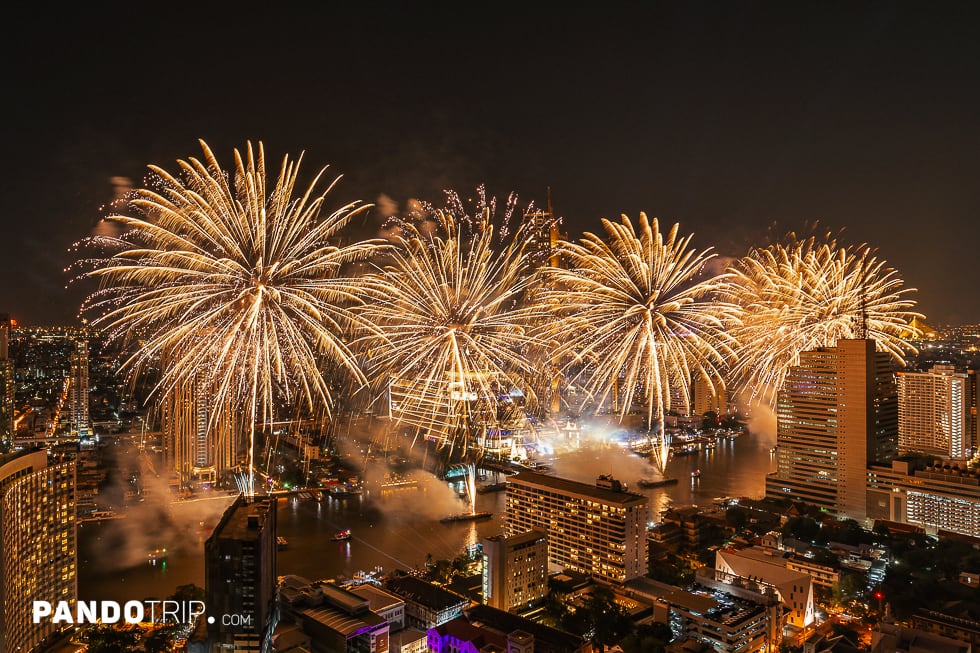 Fireworks have been around for hundreds of years in one form or another. The first fireworks that were created in China, when gunpowder was invented sometime between the 7th and 9th century, were simple explosives. It didn’t take long though before they were developed into something a lot more impressive than a flash and a bang.

In the 13th century firework displays had become popular with European gentry. By the 1600s the trend had spread across the Atlantic to the US as migrants took their love of letting off fireworks during celebrations with them to their new home country.

One of the biggest celebrations in the world where firework displays are used is New Year’s Eve. It’s a time when cities around the globe pull out all the stops to say goodbye to the old year by making as big a spectacle as they can.

There’s nothing more spectacular than a massive fireworks display that lights up the night sky with a shimmering cascade of colorful explosions. Some cities know how to do it just a bit better than the rest though and have turned their annual New Year’s Eve fireworks into an art form that attracts thousands upon thousands of spectators.

The countdown to New Year’s Eve in Sydney starts from the 1st of January. That’s how anticipated this major event on the calendar is there. Because of the time zone Sydney is in, it’s one of the first to hear the chimes of midnight, but they get started way before then.

Sydney’s two New Year’s Eve firework shows take place in Sydney Harbor on and around Sydney Harbor Bridge, with the Sydney Opera House as a backdrop, at 9pm and midnight. There are plenty of amazing viewing points where you can see the millions of dollars worth of fireworks light up the sky. Some of the best spots to the Sydney fireworks are:

Places to stay in Sydney for New Year’s Eve

Sydney may take the number one place on this list of best fireworks shows in the world, but believe it, Dubai comes in a very close second. Over the past years, Dubai has given Sydney some stiff competition for that top spot and won numerous awards for its record-breaking fireworks shows.

While the Burj Khalifa is undoubtedly the central attraction, the light shows on the world’s most impressive skyscrapers themselves are incredible, it isn’t all there is. There are multiple points across Downtown Dubai that participate in the city’s coordinated firework show including The Palm and Burj Al-Arab. There are so many in fact, it’s pretty mindblowing to watch.

To get the full impact of the Dubai fireworks show you really need to be at a distance from it. Al Seef is  a great spot to head for especially if you want a pre-show meal by the waterfront or, when you want to be closer, but don’t want to crane your neck too much, try Burj Park.

Places to stay in Dubai for New Year’s Eve

When you can’t get enough of New Year’s Eve firework displays then you need to bring in the New Year in the Brazilian city of Rio de Janeiro. You won’t be alone in your longing for the show not to end either.

The Rio de Janeiro fireworks show takes place off the shore of Copacabana Beach and goes on for anywhere between fifteen to twenty minutes. You’ll be lucky if you can see a grain of sand through the crowds that line Copacabana Beach to watch it. This Brazilian fireworks show attracts record numbers of spectators. Forget thousands. Think in the region of three million and you won’t be far out in your calculations.

Places to stay in Rio for New Year’s Eve

You can count on the Americans to do things differently and they don’t miss their chance on New Year’s Eve in New York. The en-mass celebration takes place in Times Square and is initiated by a huge illuminated sphere that gradually descends down a pole on top of One Times Square as the final seconds of the old year tick away.

Before it can drop, the timeball has to be raised and that happens at around six in the afternoon at the evening’s opening ceremony. By then Times Square is already heaving with crowds who stay to enjoy various live performances while waiting for midnight when the real party starts.

Places to stay in New York for New Year’s Eve

New York isn’t the only city in the world that likes to hold an extended New Year’s Eve celebration. Taipei in Taiwan does too and it’s a brightly lit one. In Taipei the buildings are decked with illuminations, but those decorations fade into insignificance once the fireworks show on the Taipei 101 begins.

After hours of festivities throughout the afternoon and early evening which include live performances from popular Taiwanese artists, the Taipei 101 takes center stage. It’s a very concentrated exhibition so if you want to get a good view of the spectacular you need to be either in front of the city hall or at the Sun Yat-sen Memorial Hall with the rest of the melee.

Tip: You can buy tickets to experience the Taipei 101 fireworks show from the building’s one thousand-foot high observation deck. It’s a privileged position, but don’t forget, lots of fireworks create lots of smoke and smoke rises. Taipei 101 has, as the name suggests, one-hundred and one stories and the observatory is on the eighty-ninth floor. While the New Year’s Eve party they hold there is amazing, you’re not going to see a great deal of the fireworks being exploded on the twelve floors above your head.

Places to stay in Taipei for New Year’s Eve

You’ll need to plan well in advance if you want to attend the main fireworks display in London. The event that takes place on the South Bank of the River Thames is a ticket only affair. The show, with the London Eye at its center, starts as soon as Big Ben has finished chiming midnight.

Some of the best places to view the show are the ones that are ticketed like Westminster Bridge, the Embankment and Waterloo Bridge. They’re great, but not as good as one place you can go to watch the fireworks for free.

Pack a picnic and some blankets and leave early to claim a spot on Primrose Hill in the city’s Regent’s Park. From there you’ll be able to see almost all of the fireworks displays taking place in the city, not just the one on South Bank and it won’t cost you a penny.

Places to stay in London for New Year’s Eve

The Scots have a flair for two things. The first is distilling great whiskey and the second is for celebrating New Year’s Eve. You’ll need some serious stamina if you’re going to celebrate Hogmanay in Scotland as the event lasts for three days.

At New Year the streets of Edinburgh turn into a party venue ranging from outdoor discos to live music performances to, more sedate, candlelight concerts in the cathedral. The midnight fireworks show explodes from the battlements of Edinburgh Castle.

Princes Street Gardens below the castle is the location of one of the celebration’s main events and one of the most exciting spots to watch the fireworks from. If you couldn’t get a ticket, don’t worry because basically anywhere you can see the castle from, you’ll see the show. If you want to be with the masses of street revelers then check out Castle Street, George Street, Calton Hill or North Bridge and you’ll have plenty of folk to link arms with when it’s time to sing auld lang syne.

Places to stay in Edinburgh for New Year’s Eve

Whoever said fire and water don’t mix didn’t celebrate New Year’s Eve in Bangkok. One of the city’s main firework shows takes place on the Chao Phraya River where it meanders in front of the Asiatique shopping mall.

Excitement for the midnight show in the River Park ICONSIAM is heightened by a series of music and dance performances that begin in the late afternoon and continue throughout the evening. Not everyone chooses to stay on dry land though. One of the nicest ways to see the ICONSIAM spectacular is to get out on the river on a New Year’s Eve boat cruise. The river cruises set off around eight-thirty and stay afloat until after the fireworks show is over.

Places to stay in Bangkok for New Year’s Eve

Spend New Year’s Eve in the Icelandic capital and you’ll be able to participate in what is probably the world’s largest do-it-yourself New Year’s Eve fireworks show. In Reykjavik the annual end of the year festival is used to raise money for the country’s search and rescue service, Ice-Sar.

The Ice-Sar sells tonnes and tonnes of fireworks to the city residents who then hold their own personal fireworks displays. Many people let off the fireworks in their gardens while others go to the city parks, gather in the grounds of the Perlan Museum or the Hallgrimskirkja Church. Reykjavik’s New Year’s Eve is a real family affair, but no less spectacular than any other.

Places to stay in Reykjavik for New Year’s Eve

When it does happen, the event is usually announced around mid-November by the city mayor, it’s as much of a laser light show as it is a fireworks one. It’s still an incredible sight though and well worth seeing, but double check the event is actually on before you start making travel plans.

Places to stay in Paris for New Year’s Eve