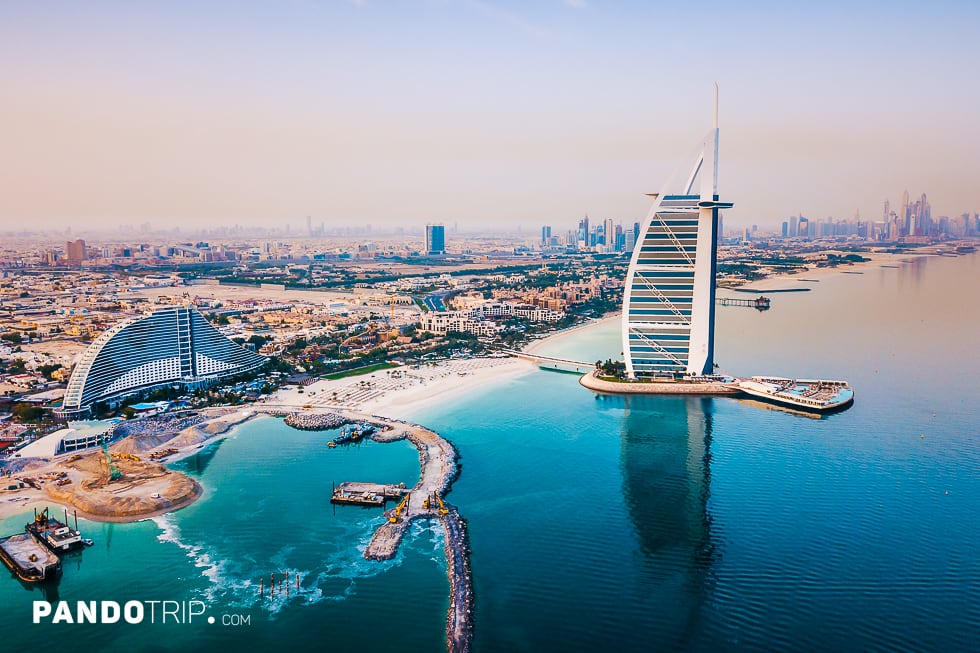 The Burj Al Arab hotel is one of the most famous landmarks in Dubai. The hotel is situated on its own artificial island, overlooking the turquoise blue waters of the sea. The building’s shape resembles the sail of a ship and stands out even in Dubai’s impressive cityscape. It’s no surprise that Burj Al Arab is one of the most photographed buildings in the world.

Often described as “the world’s only ‘seven-star’ hotel,” Burj Al Arab is exceptional in many ways. It is connected to the mainland by a private bridge road, which ensures guests’ privacy. The hotel has 199 exclusive suites, each allocated to eight dedicated staff members. Six lavish restaurants are available at Burj Al Arab, including the famous Al Mahara (“Oyster”) with a large seawater aquarium. The hotel also has a luxury 10,000 sqm platform with two pools, cabanas and a 1,120 sqm beach area.

The Burj Al Arab is officially rated Five-Star Deluxe, the highest official ranking. There is no such rating as “seven stars”. The term appeared when a British journalist visited the hotel on a pre-opening press trip. She wanted to describe the grandiosity of the Burj Al Arab and called it a seven-star hotel. The hotel management claims they have never called that themselves and never used the term in advertising.

Who owns the 7-star hotel in Dubai?

The hotel is owned and managed by the Jumeirah Group, a global luxury hotel company that operates many luxury properties in various countries in the Middle East, Europe and Asia.

How much is a night at Burj Al Arab hotel?

Obviously, staying at the Burj Al Arab is an upscale experience. However, if you’re a hotel buff, consider booking a stay and experiencing this luxurious hotel to the fullest. You can check the current rates and book a room on this website.

Of course, staying at the Burj Al Arab is the best way to experience it fully. However, due to the high price tag, it’s hardly an option for most visitors. But visiting the 7-star hotel in Dubai doesn’t necessarily mean spending the night there. Other available ways that won’t break the bank are listed below. Keep in mind that all the options listed here require a reservation.

Burj Al Arab is one of the most photogenic buildings in the world. So, if you want to fill your Instagram feed with great pictures, here are a few suggestions for the best spots to take photos of Burj Al Arab.

Suspended over 200 meters above the ground is Burj Al Arab’s helipad, which is often called the “most famous helipad in the world.” The 24-meter wide helipad is primarily used as a part of the hotel’s concierge service – Burj Al Arab offers a Rolls Royce or helicopter to pick up guests from the airport.

However, the helipad is better known as a location for various events and stunts. In 2005 the helipad was converted into the highest tennis court in the world, where Roger Federer and Andre Agassi played an exhibition match. Tiger Woods and Rory McIlroy hit a golf ball there. In 2014, F1 driver David Coulthard spun “doughnuts” on the Burj Al Arab’s helipad. After a couple of years, a ring was constructed, and Anthony Joshua held a sparring session up there. BMX biker Kriss Kyle jumped off a helicopter onto the helipad in 2019. And recently, the Burj Al Arab hosted its first-ever art exhibition on its helipad.