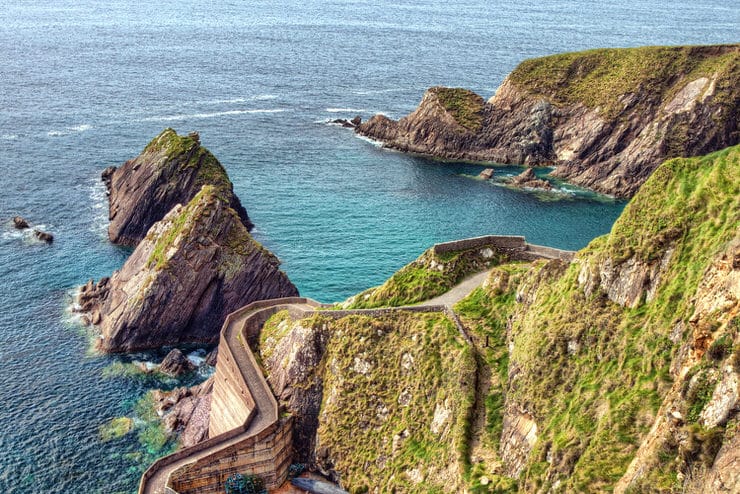 The Dingle Peninsula is one of the most scenic places in Ireland—or in fact, in the whole world! When you’re thinking of Ireland, chances are you’re thinking of the country’s beautiful, emerald-green hills, its charming little towns, or its dramatic, rocky coastline. These and many more charms are on display in the Dingle Peninsula—along with the famous Irish hospitality. Not sure if you should add it to your itinerary? Here are ten amazing things that you could be doing on a trip to Dingle:

# 1. Take a scenic drive around the Dingle Peninsula

If you’re looking to see the best that the peninsula has to offer, your best bet is to take a car and go for a drive. You’ve got a couple different options for scenic routes here. Personally, I love the Slea Head drive, which hugs the coast of the peninsula for a lot of the way, treating you to extremely scenic drives—and Slea Head itself is actually one of the most western points in Europe! But you won’t be disappointed with a drive over Conor Pass, which will treat you to some incredible views on a clear day (plus, you’ll get to drive past plenty of sheep, as well as a waterfall!).

Where to Go: Head west along the R559, following signs for the Slea Head drive (Slí Cheann Sléibhe), or follow the N86 to Camp and hang a left on the R560 to get to Conor Pass. 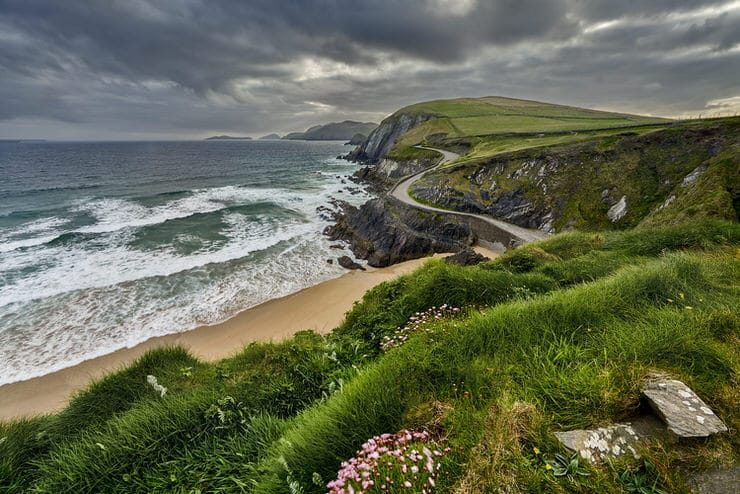 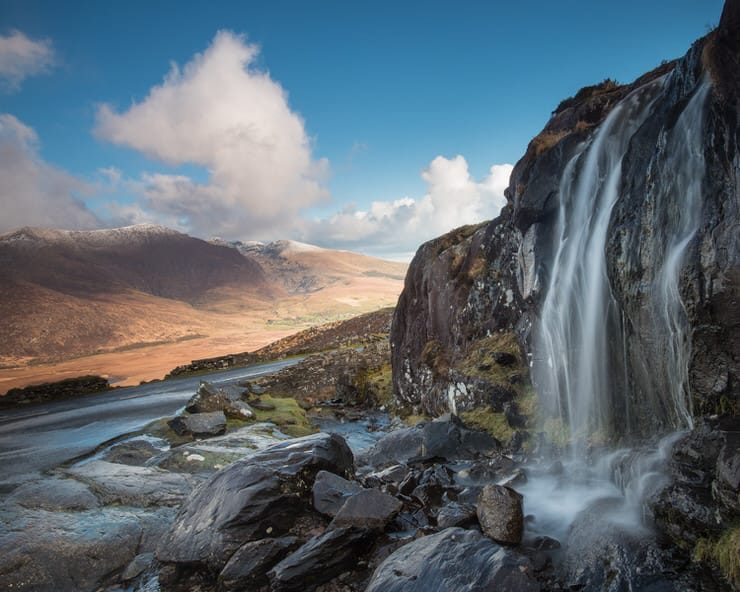 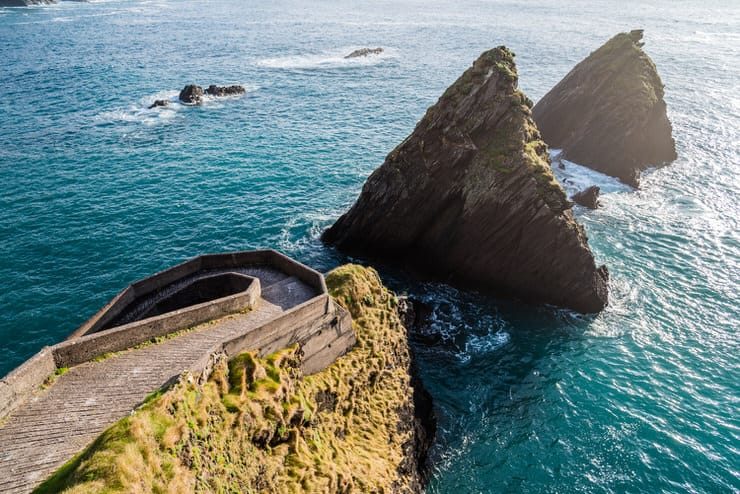 Given Ireland’s latitude and typically rocky shoreline, the country isn’t exactly a tropical paradise. But Dingle’s Inch Beach is definitely worth a visit—even if you come during the winter, you’ll find that it’s a scenic spot to take a stroll. (Don’t worry, “Inch” is definitely a misnomer; the beach actually stretches for a few miles!) It has lovely golden sand and some wild-looking dunes, and during the warmer months can be a great place to swim, surf, or soak up some of that rare Irish sunshine.

Where to Go: Follow the N86 east; then, turn right onto the R561. Follow the shoreline until you reach the beach. Total trip should only take about half an hour driving. You could also take a bus from Dingle (departs outside the Quay Super Value); these take about 40 minutes and leave three times a day: around 9am, 1pm, and 5pm, with returns at 12pm, 3:45pm, and 8pm. 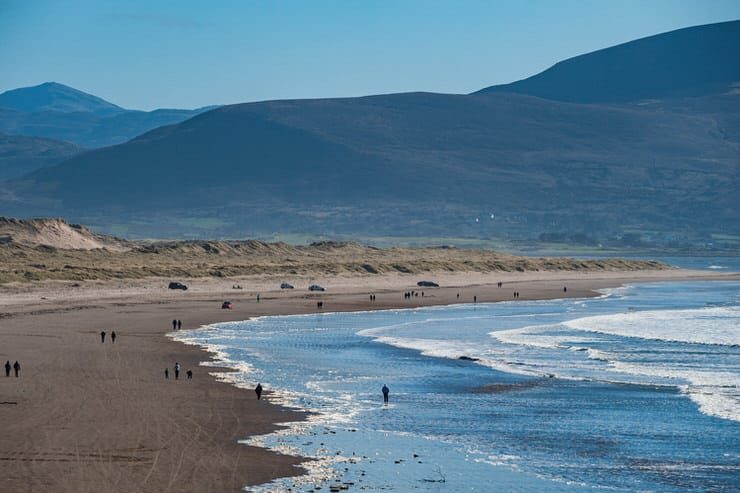 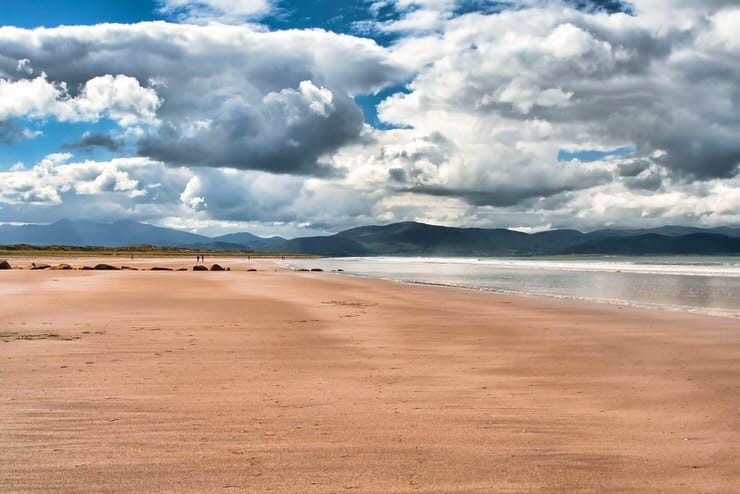 Hiking in Ireland is one of the best ways that I found to take in the country’s extraordinary landscapes. Despite the fact that Mt. Brandon is one of the highest peaks in the area, though, you don’t need to be in top physical form to hike up it and enjoy the views. In fact, the whole hike can be completed in a matter of a few hours! And the view from the top—which on a good day will be an impressive panorama of the Atlantic ocean, a few other mountain peaks, and sweeping views across the flat Irish countryside… Well, it’s absolutely incredible.

Where to Go: Head west out of town as though you were planning to take the R559—but when you reach the traffic circle just before the Dingle Distillery, take the northern exit towards Feohanagh (An Fheotanach). Continue north until you see Mt. Brandon. 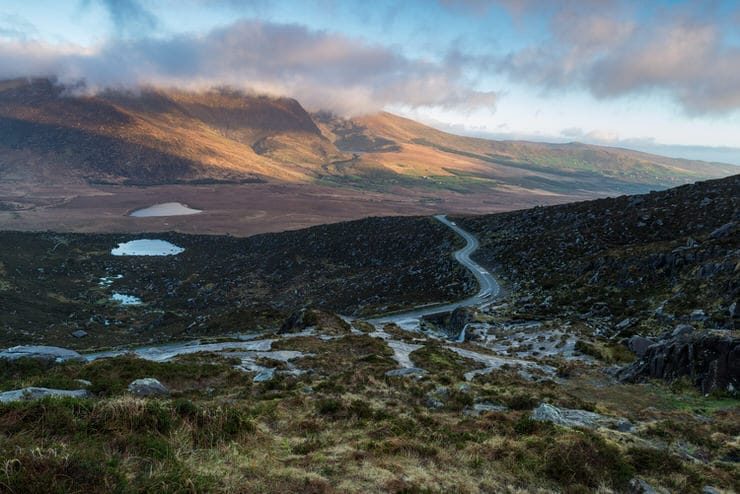 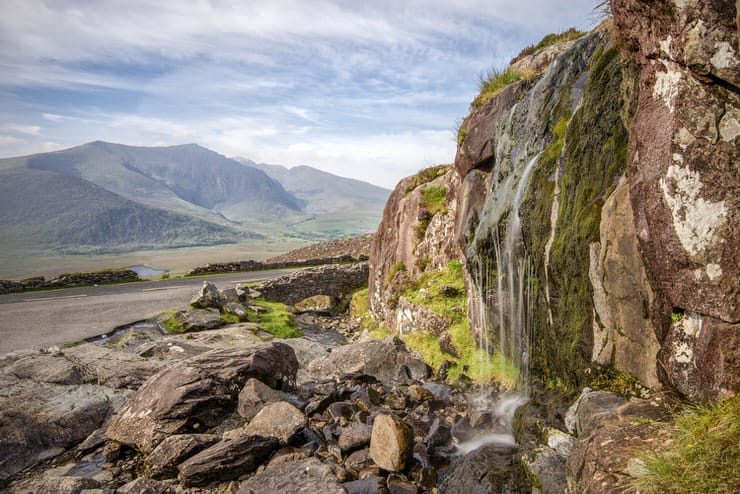 The Blasket Islands are the westernmost point in Europe, and they have a fascinating history. Great Blasket Island is a narrow stretch of rock floating out in the sea which has fascinated people for many hundreds of years and was actually inhabited on-and-off from pre-history up until the early 1950s, when the remaining citizens had to leave the island because of its lack of basic infrastructure. At that point, there were only about 30 inhabitants remaining, and there were no doctors, teachers, or shopkeepers left! It was once home to some of Ireland’s most famous writers, and it’s still home to an impressive array of flora and fauna.

Where to Go: The Blasket Islands are an easy ferry ride from Dingle’s marina, where boats leave daily (weather-permitting) at 11am. You can even book online, to further simplify your visit. Prior to your visit, you may also want to check out the Great Blasket Heritage Center in nearby Dunquin—it’s an easy drive along the R559, and it’s actually along your way if you do the Slea Head drive first. 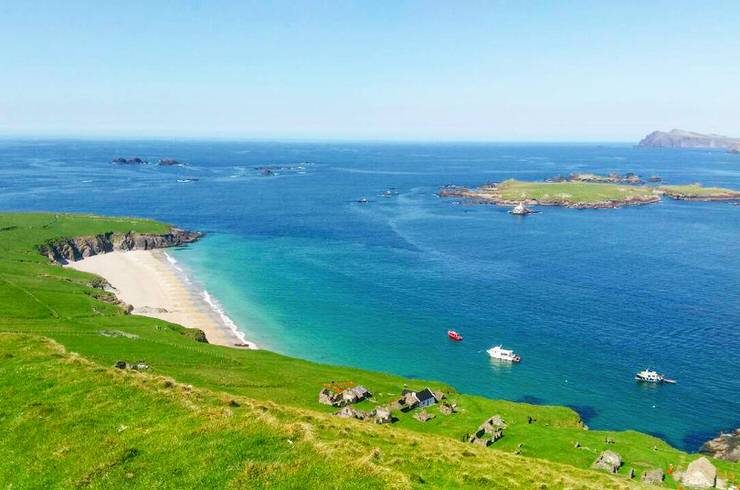 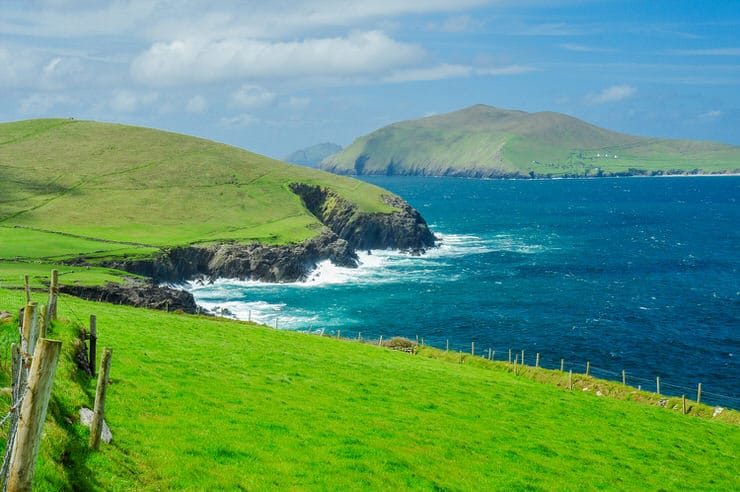 View of the coastline with Great Blasket Island in the distance, Dingle Peninsula, Ireland © Shutterstock, Inc.

# 5. Feast on some amazing seafood

As you might expect from an area with such a rich fishing heritage, the seafood in Dingle is out of this world. From seafood chowder to fish ‘n chips to lobster and crab, you’ll find each restaurant offers an impressive menu—there’s a little something for everyone!

Where to Go: From hole-in-the-wall to the fancier restaurants, you’re going to have a wonderful culinary experience. However, Out of the Blue and The Boat Yard are consistently ranked amongst the top seafood restaurants in Dingle—although no one really seems to be able to agree on which is the best! Both serve up the best of the local catch, with picturesque views out over the marina and the rest of the shoreline. In a country full of tasty seafood restaurants, I still believe these rank amongst the best.

Location on map: Out of the Blue and The Boat Yard 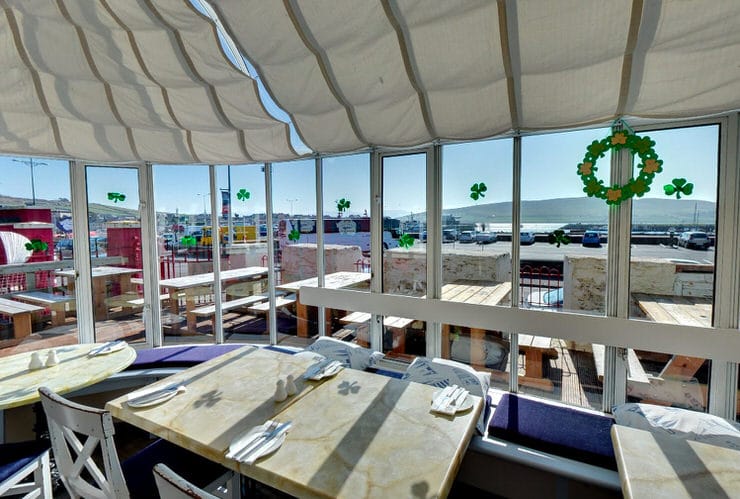 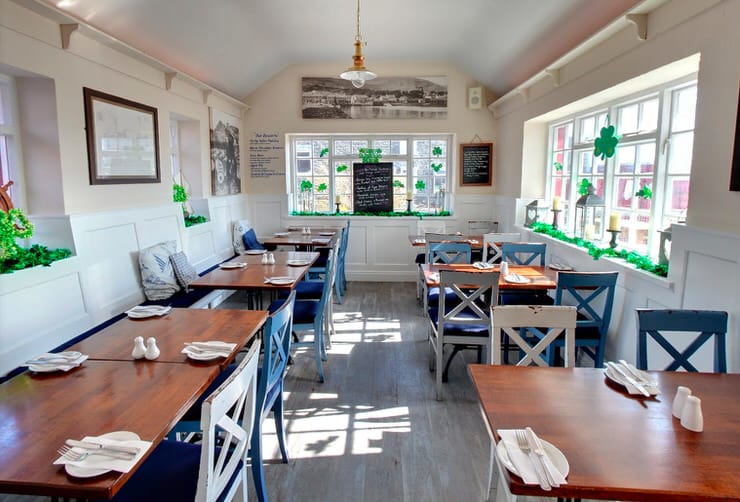 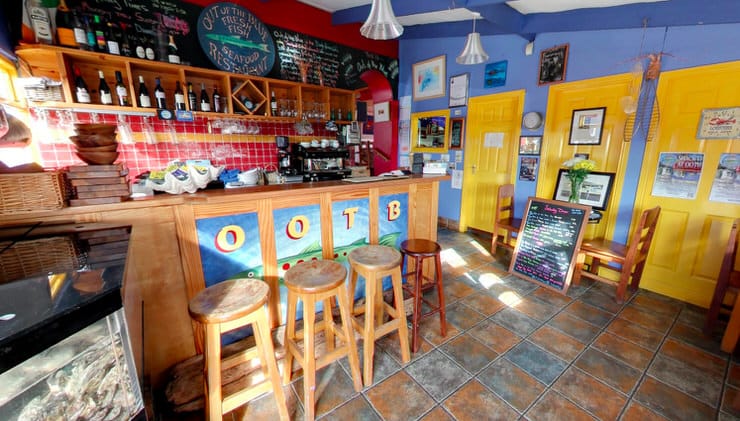 Out of the Blue Restaurant, Dingle

I mean, you can’t visit Ireland without visiting a traditional Irish pub, can you? And believe it or not, Dingle has about four dozen pubs for you to choose from! Even if you’re not much of a drinker, pubs are a great place to grab a bite to eat, hear the local gab, or catch a great trad (that is, traditional music) session in the evenings.

Where to Go: Many of Dingle’s pubs were originally intended to be different sorts of shops—and some, like Foxy John’s, which is a hardware store by day and a rowdy pub by night, still do double-duty! Other popular local spots include Curran’s Pub and Dick Mack’s. Usually when I’m looking for a place to spend an evening in a small Irish town, though, I just wander down the main street until I hear music that I like coming from inside one of the pubs! Pop inside and grab a seat at the bar and you’re in for a night of excellent craic (pronounced like “crack”, that means fun or entertainment). 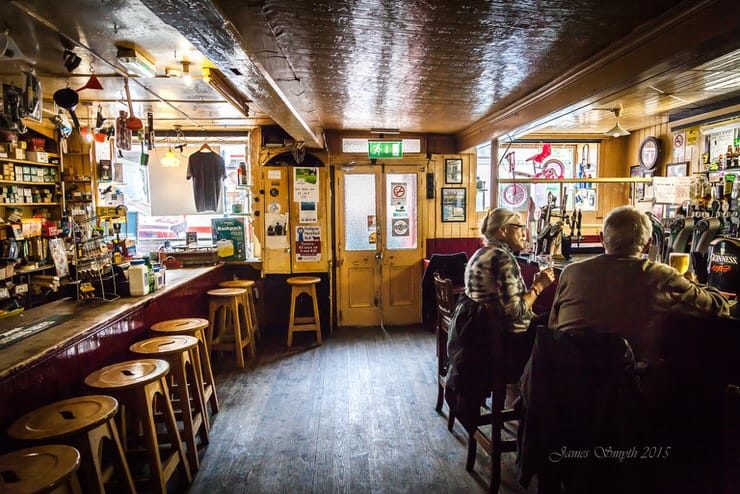 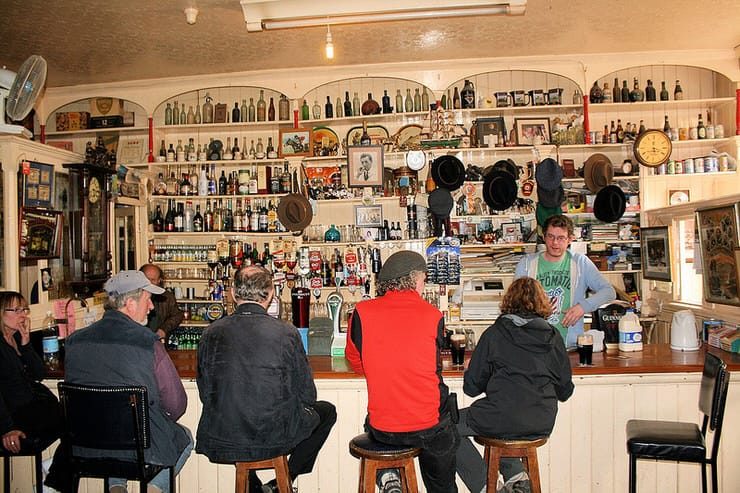 The waters around Dingle are a great place to see some of the local fauna—and there’s a lot more than fish to be seen! In fact, Dingle’s unofficial mascot is a bottlenose dolphin named Fungi, who you can frequently spot swimming offshore. There are plenty of tours that will take you out for a couple hours, or you can do it yourself by renting either sailboats or sea-kayaks.

Where to Go: Blasket Islands Eco Marine Tours offers both morning and afternoon tours (or full-day tours), while Dingle Bay Charters Eco Tours depart at noon daily. The former depart from Ventry marina (about four miles outside Dingle); the latter depart from Dingle marina. Note that tours are only offered between the months of April and September. 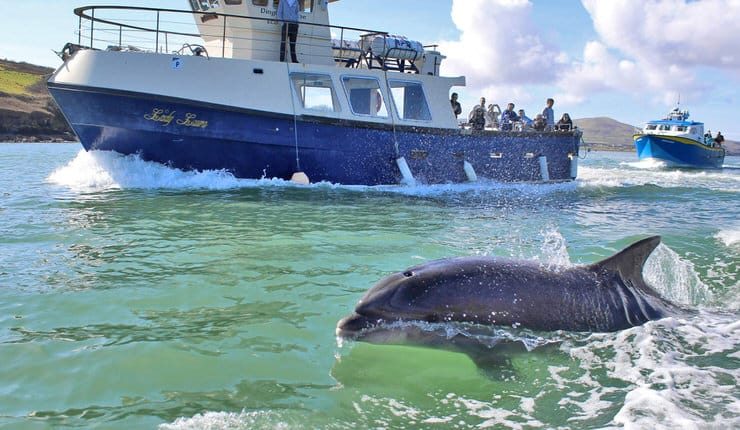 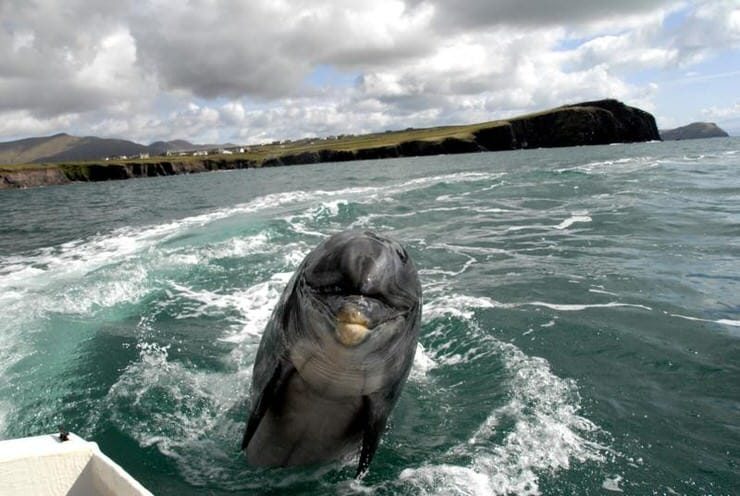 These conical huts, which once numbered many hundreds, are scattered around this area of Ireland. They were once the homes of families or monks and were popular because their construction required only local stones to build—believe it or not, these ageless buildings have no mortar or anything else holding them together, but somehow they still remain reasonably dry and cozy inside despite the oft-harsh Irish weather. Of similar construction is nearby Gallarus Oratory. There’s some disagreement over when this church was built, but it has likely been standing since at least the 12th century and possibly earlier—again, without any mortar holding it together!

Where to Go: To get to the Fahan beehive huts, you’ll follow the R559 west past Ventry and towards Slea Head. Follow the Slea Head loop around the full length of it and you’ll come to the Gallarus Oratory between Ballyferriter and Murreagh—or if you don’t plan on doing the full loop, you can reach the oratory by heading counter-clockwise (that is, starting to the north) around the Slea Head drive. 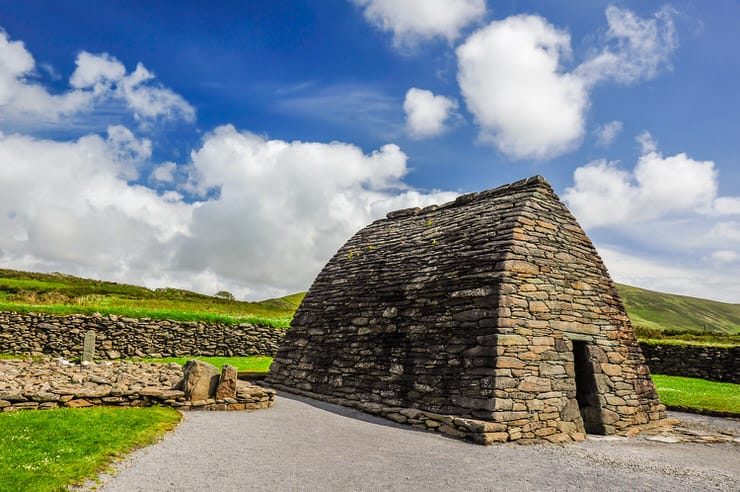 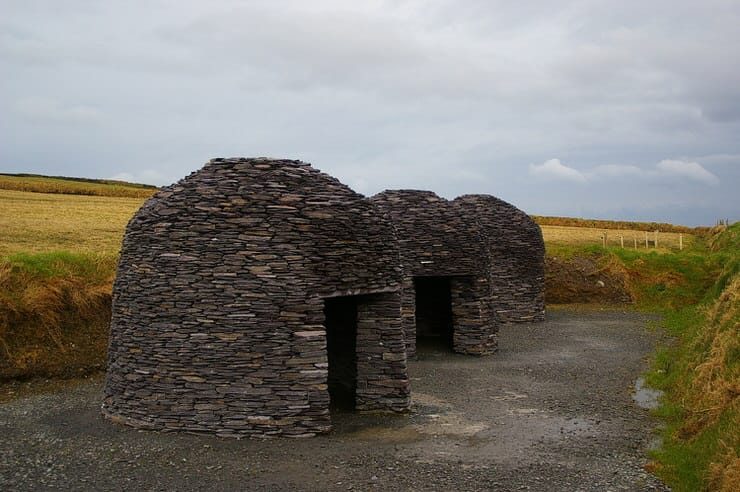 Remember Foxy John’s, the hardware store-turned-pub? Believe it or not, they also rent out bicycles during the day. Given that a lot of the area around Dingle is reasonably flat, this can be a fun way to get out and see the local area at a slower pace than by car—but remember to wear layers and carry something waterproof with you, because Irish weather can turn at a moment’s notice, especially along the shore!

Where to Go: The guys at Foxy John’s can give you a map and recommendations as to where to go (taking into account the weather and your physical condition), so don’t worry! 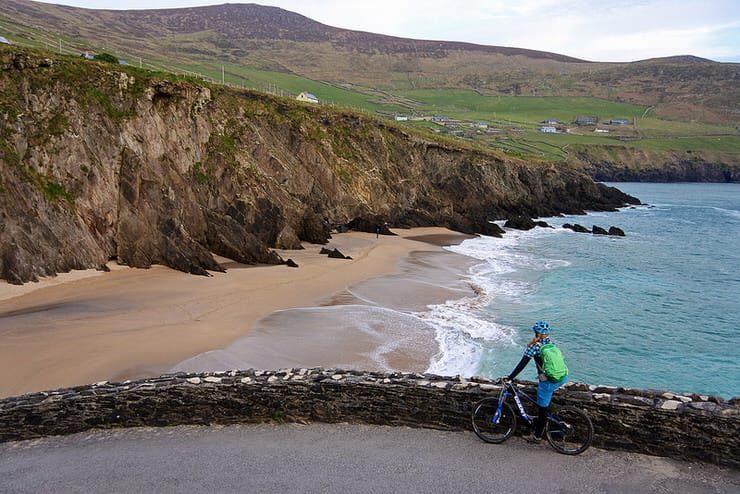 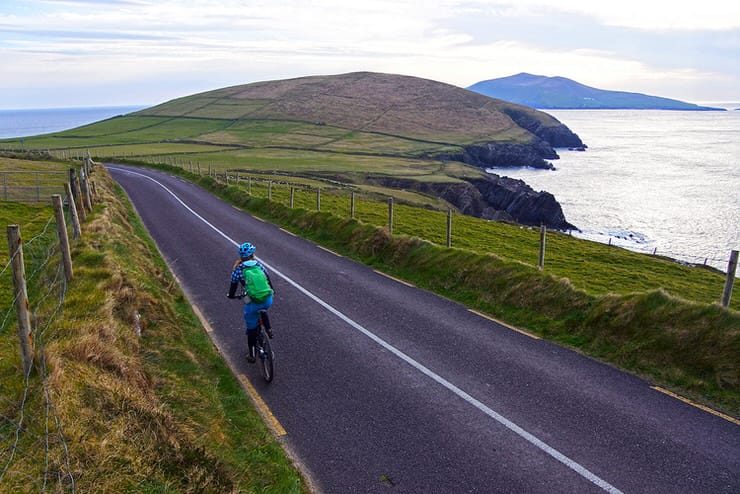 # 10. Take a tour of the Dingle Whiskey Distillery

Ireland is, of course, famous for its beer—Guinness, anyone?—but there are plenty of other great drinks to come out of the Emerald Isle. However, the number of distilleries in Ireland rapidly diminish around the turn of the 20th century. It’s slowly coming back to life in recent years, and the Dingle Distillery, although a relatively small-scale operation, is the perfect example of this. It can be a fascinating place to tour—and is especially worth a visit if you have a rainy day with nothing else to do! 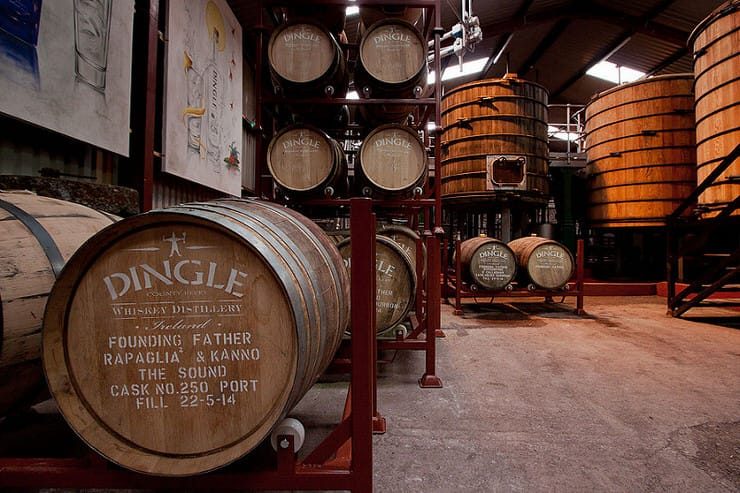 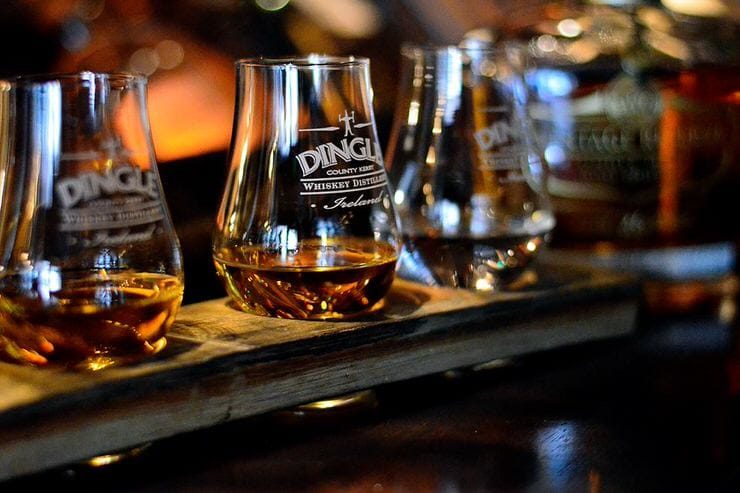 The southwest of Ireland has plenty of charm and plenty of fun for you to discover, and nowhere makes a better base for exploring that quaint Dingle. Have you ever been to Dingle? Share your stories below!