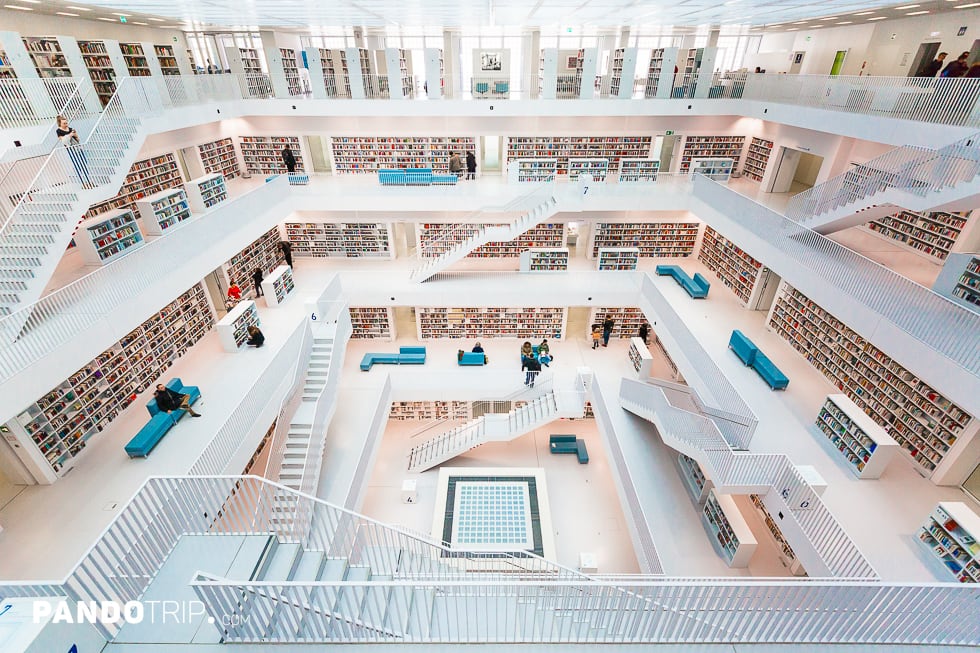 Some may claim that the library culture is dying (and good riddance), but the visitors to these libraries would say that’s far from the truth. Bookworm or not, there’s a lot to love about these ten awesome libraries in Europe. From the futuristic Stuttgart City Library in Germany to the practically ancient Saint-Geneviève Library in France, come with us on a tour of the most interesting places to check out a book. You’ll be surprised by what we find, and perhaps even find it in your heart to give the future of libraries a bit more credit.

In an age where many communities consider libraries a relic from the past, Denmark’s appreciation for the future of the literary world is clear. The Royal Library, known as the Black Diamond for its granite accents, is quite unlike any library we’ve ever seen, with its ultra-mod appearance and sleek interior. It’s also the younger generation figured out—the building’s coffee shop is an irresistible draw on rainy days. We love classic fresco and the in-house concert hall, too, which allows visitors to enjoy more than one type of art.

Dublin’s Trinity College Old Library really is old—or at least, its books are. Although the library is a mere 400 years old, it contains an impressive array of books dating through twelve centuries, the oldest of which is the famous Book of Kells. Although most visitors come to the library to check out the Book of Kell’s Latin scripture and illumination, they stay for the myriads of other books available for enjoyment. We know there are a ton of bars you want to hit while you’re in Dublin, but it’s worth it to stop for a bit at the Trinity College Old Library.

This ain’t your grandma’s library. The Stuttgart City Library has a lot of great reading material, but it’s the super weird shape of the building that makes people want to hang out. The library is built out of glass bricks that glow blue at night, and the interior is totally white and minimalist. Strangest of all, the library is shaped into a reverse pyramid, with layers of floors that get wider as you ascend. Our favorite part? The rooftop terrace, where you can watch the clouds float by while working on that page-turner.

Because we know you’ve always hoped to visit a library that looks like a pile of Christmas presents, we give you the Library of Birmingham in England. The library’s coolest element, for the nerdiest among us, is the Shakespeare Memorial room near the top of the library. There are some first-edition Shakespeare copies in this room, so even if you have no clue what a “spleeny lily-livered codpiece” is, you’ll want to take a look. For the less poetically inclined, the many terraces make a perfect place for some light reading.

Also, the Library of Birmingham is Europe’s largest library, so really think about a visit there. Not only will you have a great time exploring its vast collection of rare books, archives, and photography, but you’ll also have the bragging rights of having visited the largest library in Europe.

If the perfect library exists, it’s this one. The Vennesla Library in Norway has a streamlined design that combines the minimalism of modern trends with the quiet comfort you loved in your childhood libraries. Each shelf is not only part of the structural design of the building, but it’s also a reading chair. As a bonus, the reading nooks are equipped with noise-absorbing materials and designs so that people can read in peace. Now, that’s a library. It’s the bookworm’s dream.

After a decade of renovations, the BNF Richelieu Library in Paris has finally reopened its doors to the public, much to the delight of book lovers everywhere. This stunning architectural masterpiece is more than just a place to check out books. It’s a veritable wonderland for the intellectually curious and the literary-minded. From the majestic marble pillars to the ornate gold leaf details, the BNF Richelieu is a feast for the eyes. But it’s not all about looks – this library is home to some of the most important works of literature in the world. Whether you’re a budding Hemingway or a Shakespeare fanatic, you’ll find something to pique your interest in the stacks.

7. Joanine Library of the University of Coimbra, Portugal

Joanine Library is a series of artwork within artwork. Between the carved wood bookcases, painted ceiling, and oils hung on the walls, it might be a while before you can stop staring and actually crack open a book. On a creepier note, bats haunt the book-lined halls at night, and there is actually a prison in the basement of this library. Maybe they used to throw people in there if they forgot to return library books? We’ll take a $3 fine any day!

“Every time a bell rings, an angel gets its wings,” according to the classic movie It’s a Wonderful Life. In the Dokk1 Library, though, the bell is rung every time a child is born at a nearby hospital. Amid the joyful tinkle of birth announcements, people browse the shelves at Scandinavia’s largest library, enjoying both the reading selection and the view. There are plenty of chairs lined up at the floor-to-ceiling glass windows of the room so that the library’s visitors can watch the river below pass peacefully along the edge of the building.

If you visit the Royal Library of San Lorenzo de El Escorial in Spain, you may think you’ve wandered into an art gallery rather than a library. The ceilings are covered with intricate frescoes, and the shelves themselves are precious objects of art. However, even with all the aesthetic draw, the library’s books and history are still more intriguing. During the Inquisition in Spain, many valuable books and documents were destroyed if they contradicted popular ideology, especially Arabic books and other prohibited works. However, the library was not subjected to search, so the volumes hidden in its corridors remained untouched. They are still there today, relics of the past that survived almost certain doom.

The Malmö City Library has three buildings, all with their very own personality. If you’re feeling like a prince or princess, head over to the Old Building, which was built in the 1940s in the style of a Renaissance castle. For a more modern experience, the Calendar of Light is just as beautiful as the Old Building, but in a more updated style. At night, it glows brilliantly through its glass front. Between the two is the Cylinder, which links the two with the info desk and (of course) the very necessary coffee shop.