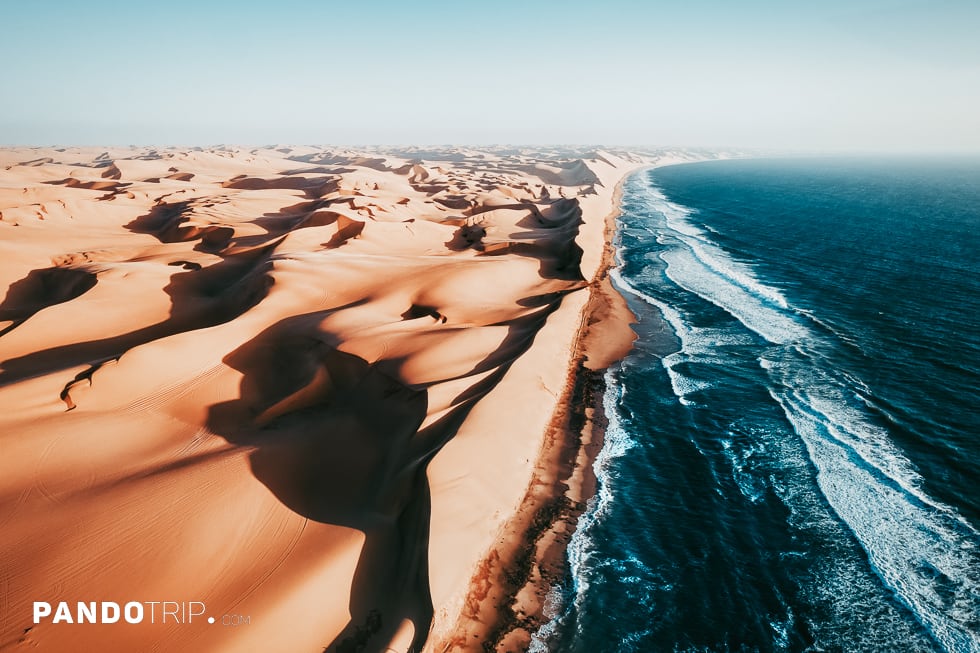 A rocky coastline where the desert meets the ocean and the ocean meets the sky is an incredible sight. Whether you are a photographer looking for the best photo op, or an adventurer who appreciates panoramic vistas, the planet Earth has you covered.

If stunning sunsets and crashing oceans are your things, here are the 10 most beautiful ocean views in the world that we promise will take your breath away.

This is the spookiest name on our list, one that will give you the chills when you hear the story behind it. Located in the oldest desert on Earth, the Skeleton Coast stretches 310.686 miles (500 kilometers) along the Namib Desert coast.

It is known as a treacherous coastline and one of the most inhospitable places on Earth.

The unpredictable Benguela current had been stranding ships for centuries, making it impossible for them to leave the shore. And so it became the largest ship graveyard in the world.

The name Skeleton Coast also refers to the whale and seal bones scattered across the entire coast due to the whaling industry.

The best view of the Skeleton Coast is from a bird’s perspective.

A scenic flight that skims low across the sea and sand where you can see the thousands of shipwrecks and skeletons and goes high enough to witness the most pristine coastlines in the world.

The Great Australian Bight is an open bay along the southern coastline of mainland Australia.

It is famous for its large and unique marine biodiversity, 85% of which can not be found anywhere else in the world. Over 1,500 southern right whales call this place home. So yes, whale watching is one of the main attractions.

Here the desert meets the ocean, and land that stretches for hundreds of kilometers forms the longest rocky coastline in the world. Some of the cliffs reach a height of 120 meters. A true wonder worth seeing.

There are many walkways and lookouts that offer amazing views of the coastline, and most charge a small fee. However, the best place to see the Great Australian Bight is 74km past the Nullarbor Motel, on the road to Perth, marked as Scenic Lookout No 1, and it’s free.

Cabo Sao Vicente, or Cape of St. Vincent, is one of Portugal’s many wonders. It boasts pristine beaches and beautiful landscapes. The line of cliffs overlooking the Atlantic Ocean offers spectacular views, some of which are 75 meters high.

Located in Vila do Bispo, in the Algarve area of southern Portugal, Cabo Sao Vicente is the southwesternmost point of Portugal and mainland Europe. Also known as “The end of the world,” Cabo Sao Vicente was a sacred site in the Neolithic period. A lighthouse stands tall on the cliff, still in use today.

The best view of the stunning coastline and the ocean is from the lighthouse. More precisely, on the outside, along the edge of the rocky plateau.

Bixby Creek Bridge is an iconic bridge on the Pacific Coast Highway 1. It is also one of the most Instagrammable bridges in LA. Many movies were filmed here, including the popular TV series Big Little Lies. Built in 1932, Bixby Bridge is an engineering marvel of its time.

You will find many scenic overlooks along the highway. However, Castle Rock Viewpoint is the best spot to witness the spectacular views of Bixby Bridge.

One of Ireland’s most famous coastlines stretches 14 km long along the southwestern edge of the Burren region in County Clare. Nature has been carving the sea cliffs for thousands of years, forming spectacular shapes and formations.

This natural wonder forms a protected area for over 20 species of nesting birds. The cliffs are so famous that they have featured in many movies, including Harry Potter, The Princess Bride, Leap Year, and Snowhite and the Huntsmen.

Hag’s Head viewpoint offers the most incredible view of the Irish landmarks. It is situated at the southern end facing the rugged Irish coastline.

Catlins coastal area in the Otago region is where you will find Nugget Point. Besides abundant wildlife and nesting birds, including Royal spoonbills, Nugget Point offers breathtaking views of the Nuggets. These are rocky islets in the shape of gold nuggets, hence the name.

The highlight of Nugget Point is Tokata Lighthouse, one of the most famous lighthouses in the world. From here, you can witness the most dramatic coastal views.

A two-hour hike up the mountain between Table Mountain and Signal Hill, Cape Town, will take you to Lion’s Head. A popular hiking spot and starting point for paragliders, the peak offers breathtaking views.

Over 200,000 hikers climb up the peak each year, making it one of the most climbed mountain peaks in the world.

For fascinating views of Table Mountain Top and Cape Town, head to Lion’s Head Summit with experienced tour guides who will keep you safe during the entire hike.

The Land of Fire and Ice is packed with breathtaking natural wonders. Látrabjarg is the largest cliff in Iceland, stretching 8.75 miles (14 km) along the Westfjords, the westernmost part of the island. The area is abundant with birdlife, including puffins and the largest razorbill colony.

Tourists and locals often try to get to the cliffs to take photos of some incredible views and get closer to nature.

Latrabjarg is not accessible by public transport, so renting a car or a campervan is the best way to get up the largest bird cliff in the world. Take road 612, around 37 miles from the village of Patreksfjörður. You can admire the majestic views of the ocean, the Snæfellsjökull glacier, and the volcano in the distance from the trails heading up the cliff.

Crashing ocean and views that will take your breath away are just a small part of what you get at Cabo Vidio. The rugged peninsula sticks out the coast along the Mar Cantabrico, overlooking the Atlantic Ocean, ideal for glorious sunsets.

The cliffs reach 80 m (262 ft) above sea level. Take a hike down and under the cliffs for the secret cave called Cueva de la Iglesiona de Cabo Vidio. Besides the cave, there is a lighthouse at the top of the cliffs, where visitors can enjoy the dramatic rugged coastal scenery.

The lighthouse Cudillero offers the best views of the dramatic cliff drops. Make sure to walk a full circle around it for a 360-degree view.

If you are looking for the best snorkeling spot in the world, this might be it. Home to a pristine marine ecosystem including Green sea turtles and Chelonia mydas, known as Honu, the wineglass-shaped bay on the southeast coast of the Island of O’ahu is worth visiting any time of the year.

Hanauma Bay is one of the most touristy places in Hawaii and is also a State Park. Tickets may be hard to get, so booking in advance is recommended.

Out of the many hiking trails in the area, Hanauma Bay Lookout (observation deck) gives you the best views of Honolulu’s prime snorkeling destination. The loop trail is moderate level, ideal for first-time visitors.

For easier access, you can park at Hanauma Bay State Park for a small fee, but parking is limited.