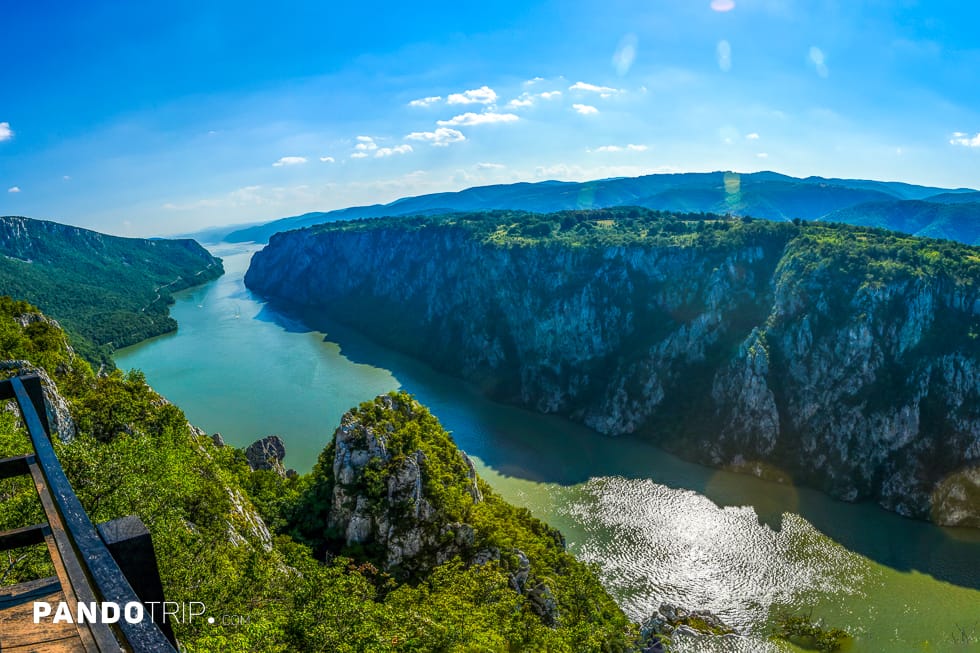 Serbia is located in the southeast of Europe and occupies the central part of the Balkan Peninsula. Its northern part is a spacious plains and southern parts characterized by hills and mountains. There are over 15 peaks above 2,000 meters above sea level. There are five national parks in Serbia: Djerdap, Tara, Kopaonik, Sar mountains and Fruska Gora, with an intact, pristine natural vegetation. The territory of Serbia is an unavoidable communication itinerary road, rail and air traffic, on the route of Western and Central Europe to Greece, Turkey, Middle East, Asia and Africa. Although Serbs generally suffered because of their “house in the middle of the road” they are extremely hospitable people, and travelers are sacred in Serbia.

Serbian can be toured step by step, it is less learned about from the books, one should listen and discern his own experience, but it should be borne in mind that it is an area of exceptional geological and historical heritage, starting from the Danube by Vinca, in the Belgrade region where there was a settlement forty centuries before the wolf nurtured Romulus and Remus.

Serbia is a good destination throughout the whole year. The northern part has a continental climate with relatively cold winters and warm summers. Hill regions have warm, dry summers and cold winters, while mountain areas have a lot of snowfall. Ski season is usually from December to March. The coldest month is January and the warmest is June, while the most rain falls in May and June.

The charm of a small town kind of Mir-Jam happily described in her novels, a patchwork of thousands of species of flowers, which decorate the private yards, leave passers speechless, two rivers and seven artificial lakes, why it is called the “Venice of Vojvodina” … Bela Crkva has all of this, a small town in the south of Banat, economically one of the poorest in Serbia, but by geographical location, nature and tourism potential – very rich. Undoubtedly, the biggest attractions are artificial lakes of Bela Crkva, which are formed by decades of excavation of gravel from the fields between the city and village of Vračev Gaj. The remains of the Pannonian Sea and groundwater immediately filled those excavations, and habitants unconsciously got seven water oases, where more than 10,000 tourists enjoy daily, when the season is in full swing.

Golubac is a city of the fairytale fortress looks and impressive architecture. Golubac is the city built on a steep, high and inaccessible rock, on the right bank of the Danube. At this point, the Danube is the widest and it looks like the sea. The fortress was built at the entrance to the Djerdap canyon. The fortress dominates this part of the Danube and it can be seen from all sides.

Kustendorff is a cultural and film destination that is unavoidable on the tourist map of Serbia and Europe. The creator of this turist miracle is the famous film director Emir Kusturica. Monica Bellucci, Jim Jarmus, Johnny Depp and many others are regular guests of Drvengrad. At this point everything is dedicated art of cinema. A most important event is the Kustendorff Film Festival, which brings together all the known personalities from the world of film.

A city north of Belgrade, Novi Sad, is the host of one of the most famous music festival in the world – Exit for 15 years, On the several stages, Exit brings together some of the best musicians from almost all known musical genres. Suffice it to mention Sting, Leonard Coen, the Prodigy. They all passed through Exit. The festival gathers thousands of tourists every year, so visit Exit is a big hit.

Tour of Nis and the monument of Constantine the Great

By the citadel bridge in Nis, on the left bank of the river Nisava, there are two monuments that remind of 1.700 and 1.600 anniversary of the Edict of Milan by tetrarchs of the West – Constantine the Great ((272 / 273-337) and tetrarchs of the East Licinius (about 250-325) the legal text from 313. year, which had proclaimed religious equality and ending the persecution of Christians.

The mountain stretches on over 300 square kilometers, where the Danube twists, while is making its way through rocky cliffs of Djerdap canyon. Since 1974, Djerdap was declared a national park and one requires a permit to climb the highest peak Miroc, Great Strbac (767), above the narrowest part of the Danube. Miroč has mountain peaks: Mali Vis, Visoki Čukar, Čaršija i Glavica, as well as the plateaus: Kiloma, Beljan i Alun. Hotels and private accommodation can be found in Donji Milanovac, Kladovo and Tekije.

Kopaonik is known worldwide for its natural beauty that tourists can enjoy during the summer and winter. Due to its favorable climate, with almost 200 sunny days a year, Kopaonik deserves its other name “Sunshine Mountain.” Kopaonik is today a haven for the elite. And not only for elite from Serbia but from all over the world. On the Kopaonik mountain is held every year a business forum that brings together entrepreneurs from all over Europe. This gathering of businessmen is similar to the famous in Switzerland. It must be noted that the Kopaonik is really green oasis on the tourist map of Serbia. As such, Kopaonik mountain is perfect for eco-tourists.

A walk down Knez Mihailova street

Knez Mihailova Street, with a row of villas, is a fine example of architecture of the nineteenth century, where the most influential and richest urban families of the era lived. Knez Mihailova Street was the first regulated and officially named street in Belgrade. Today, Knez Mihailova is the pedestrian zone and the shopping center, protected by the law. The promenade connects Republic Square and Kalemegdan. You can see the objects of cultural and historical value, such as the hotel “Srpska kruna” (Serbian Crown), today home of the Belgrade City Library.

One of the largest and best preserved cities of the Roman Empire – Viminacijum, is located in the heart of Serbia. Viminacium archaeological park provides visitors an atmosphere of past times, and in the coming decades should come to life. 18 Roman emperors were born on the territory of Serbia, a fifth of the total number of emperors who ruled Rome. On the territory of Spain, for example, were born two and one on the territory of Germany. This figure is indicative of the importance of the area of today’s Serbia to the Roman Empire until mid 3rd to the end of the 4th century. Another reason for the visit.

Located in the city center, in an area which is known as Letle Kalemegdan, Belgrade Zoo or the Garden of Good Hope was opened in 1936 and was opened by the then Mayor Vlada Ilic. Soon, the garden has become a favorite place among citizens. At the very beginning, the zoo had a surface area of 3.5 hectares, and it has spread to 7 acres, and later to 14 hectares. During World War II the zoo was damaged and the most of the animals died.