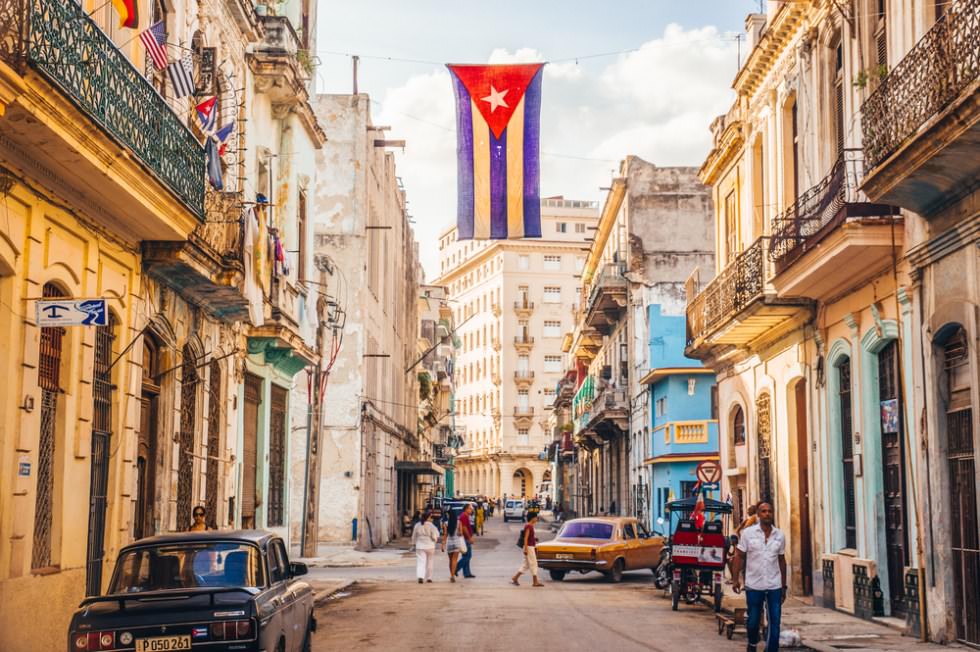 Cuba is still one of my top five countries that I’ve ever visited, and it’s actually the country that really started me on the long-term, digital nomad route. And Havana will long be one of my favorite cities in the world. After all, what’s not to love? From the colors to the architecture to the music and dance, I was totally entranced! Soak up the warmth in this beautiful country and allow your senses to be delighted by the sights, sounds, and flavors.

If you’re looking to plan a trip to Havana, here is my recommended itinerary so you can hit all those not-to-be-missed experiences:

Start your first day in Old Havana, the city’s beautiful, colonial interior. Although it can get packed with tourists at certain times of the year, is one of my favorite parts of the city to explore. The architecture is like nothing that you’ve ever seen, and there’s always something happening, be it day or night. Don’t miss the Cathedral de San Cristobal and the Neoclassical Capitol building (which is home to the third-largest indoor statue as well as a 25 karat diamond!).

Personally, I loved just strolling around the streets—but make sure you’re wearing comfortable footwear, as many of the streets are cobblestone and are often being dug up and repaired! And if you speak even a little Spanish, hole up in one of the parks during the afternoons to people-watch and converse with curious locals about everything from politics to personal interests.

Pro-tip: across the street from El Capitolio, keep your eyes peeled for a shop selling “cangrejitos”: a type of fried pastry filled with jam. Hands-down one of the best things I ate during my time in Cuba… 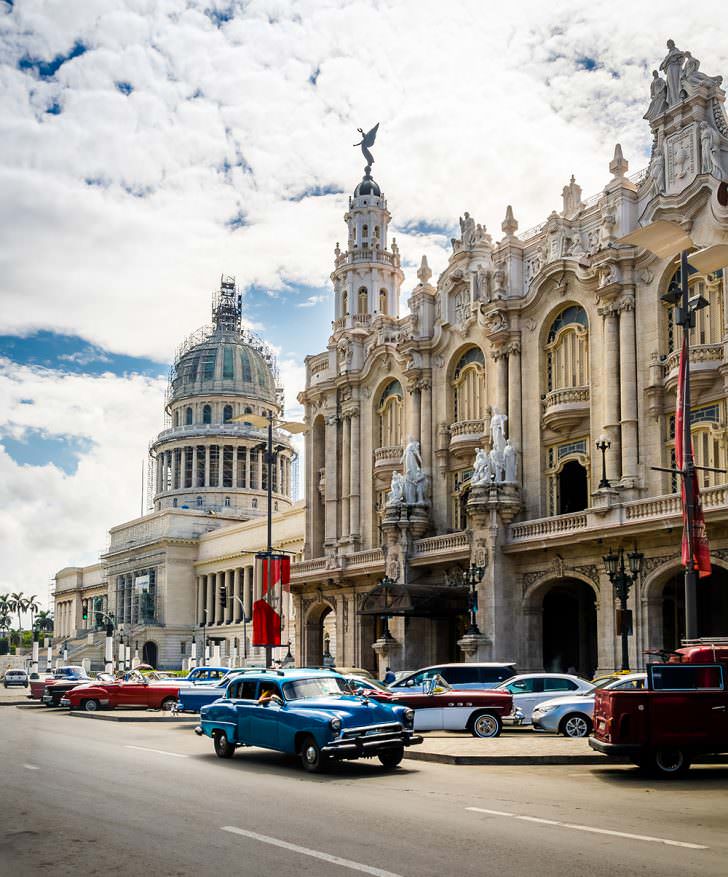 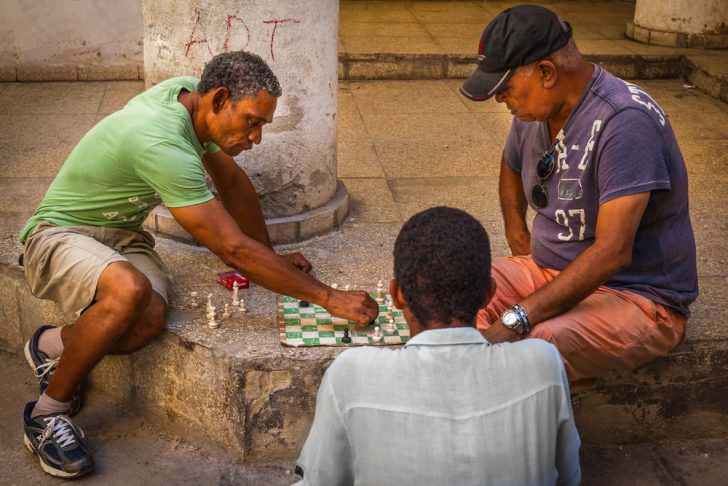 Even if you’re not a fan of rum, you’ll want to try the rum that Cuba has to offer. Havana Club is the national rum, and you’ll be able to find inexpensive bottles of the stuff in nearly every liquor store around the city. There are a few different types to keep an eye out for. If you’re looking for something to mix, you generally can’t go wrong with the white, three-year stuff. But the more aged the rum, the easier it’ll go down—and if you manage to get your hands on some of the Añejo Reserva or Añejo Especial, you’ll find that it goes down smoothly even without a chaser!

Best of all, the Museum of Rum, or Havana Club’s distillery, is located right in Habana Vieja. It might seem that the distillery tour is a bit pricey for Cuban standards, but it’s a fascinating look into the distilling —process and you get a little taste of some of the Havana Club’s finest at the end of the tour. I definitely recommend a visit. 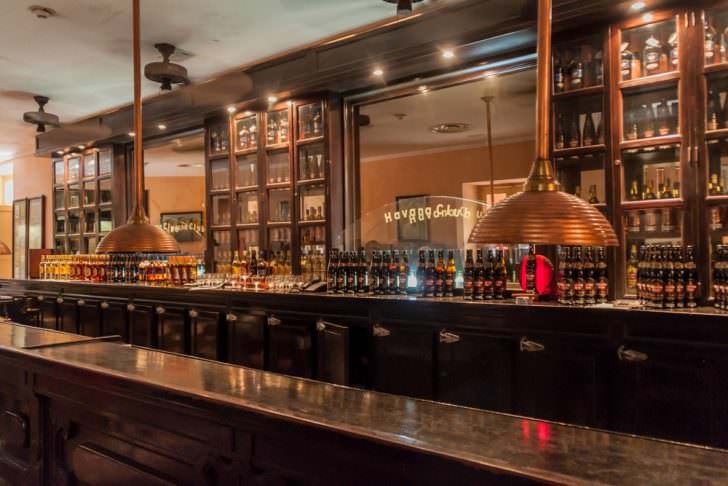 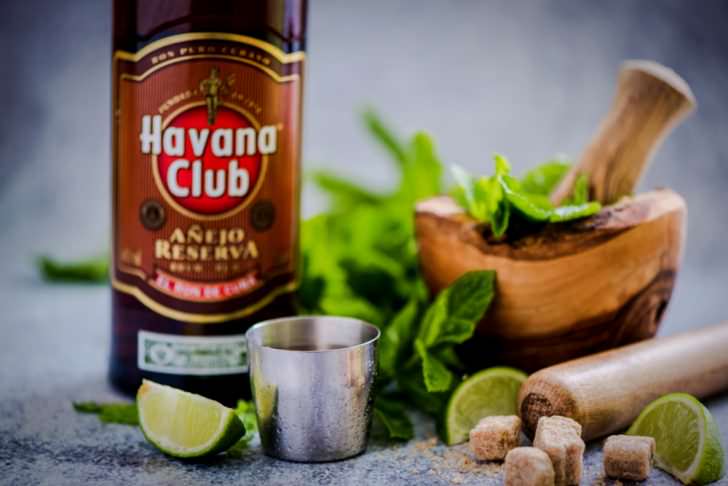 Take a stroll along the Malecón. This waterfront walk at the edge of the city is one of the best places to people-watch, hands down. During the early evening, you’ll see fisherman pulling in their wares. Later in the evening, you’ll see people strolling along, sitting out to drink, and in general just soaking in the atmosphere of a warm, Cuban night. You definitely will want to be part of this, whether you choose to get dinner or drinks at one of the seafront restaurants or bring along your own bottle to sip at like the locals do. Don’t forget your camera! 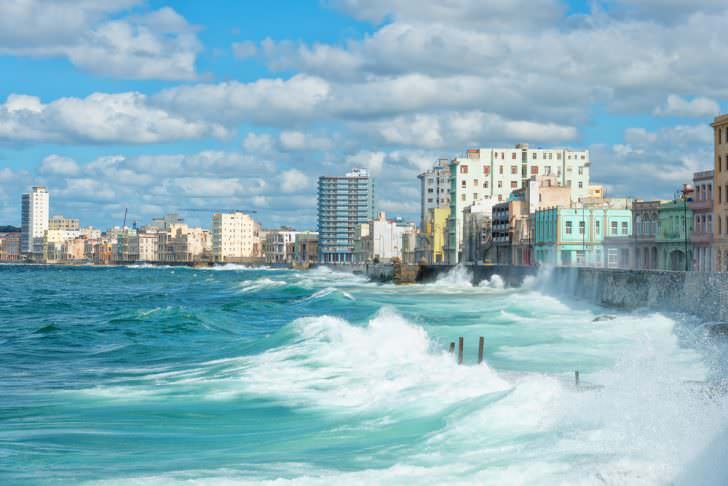 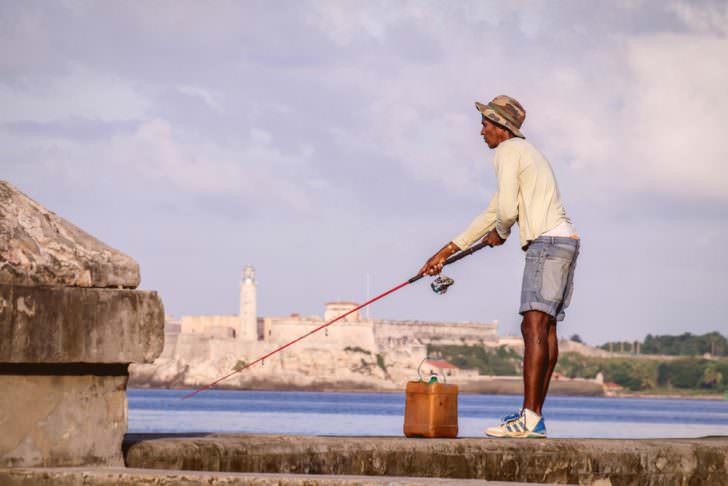 After you’ve had your fill of strolling along, flag down an antique cab. If you’re looking for that picture of Cuba, you’re usually thinking of vintage cars and palm trees, and Havana has these in abundance. Best of all, the old cars are generally pretty cheap to ride to various points around the city—so treat them just like you would a regular cab service! (Although you’ll probably want to agree to a set fare ahead of time.) Or take a ride in one of the iconic coco taxis, which are open-air, rickshaw-like taxis enjoying the views out over the ocean and the breeze in your hair. What a way to get home in style! 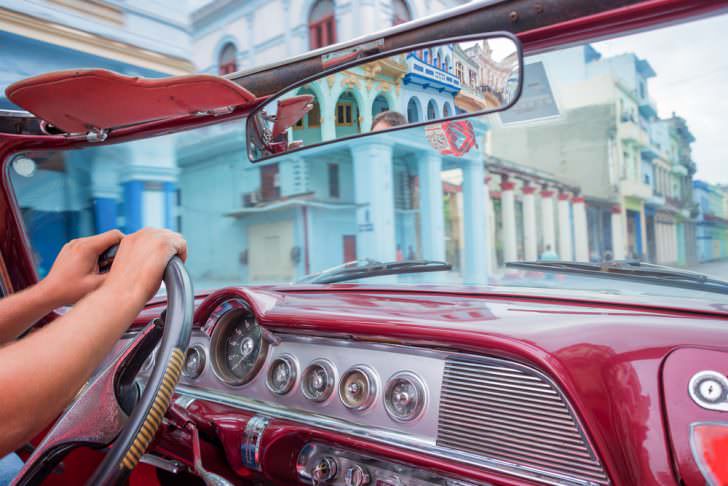 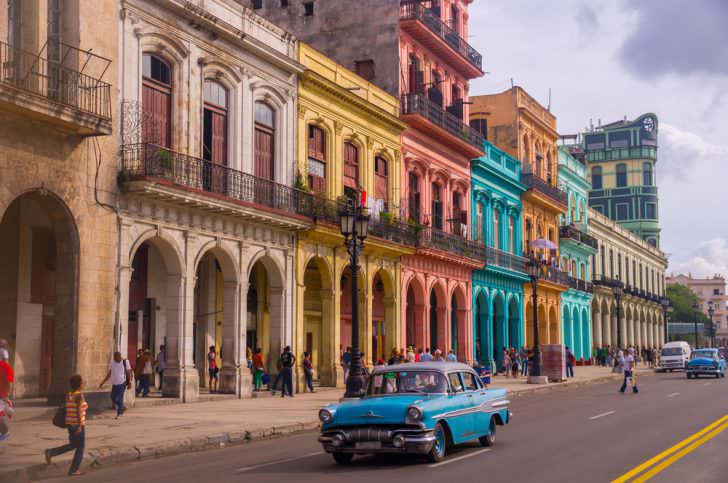 Cuba is famous for its white-sand and turquoise-watered beaches—but none of these beaches are located in Havana proper. You may see locals swimming in the waters along the Malecón, but the rough waves make them somewhat unpleasant. Playas del Este are the closest beaches to the city, and you can take an inexpensive cab ride out to them.

What I’d recommend, though, is getting out of Havana for the day. The white-sand beaches of Varadero are an easy drive or bus trip away, and you’ll be amazed by the pure turquoise waters stretching out to the horizon. At low tide, you can walk out for seemingly forever before the water is even up to your neck, and the water is clear enough that you’ll be able to see your toes, starfish, and all sorts of other things down on the sand. 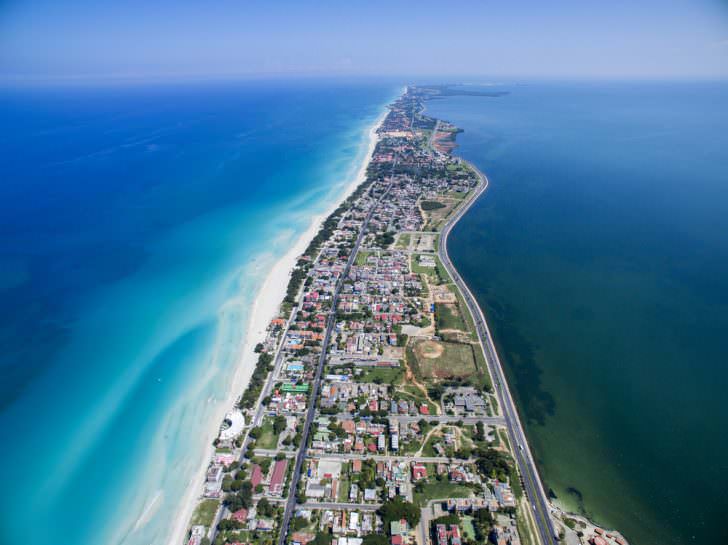 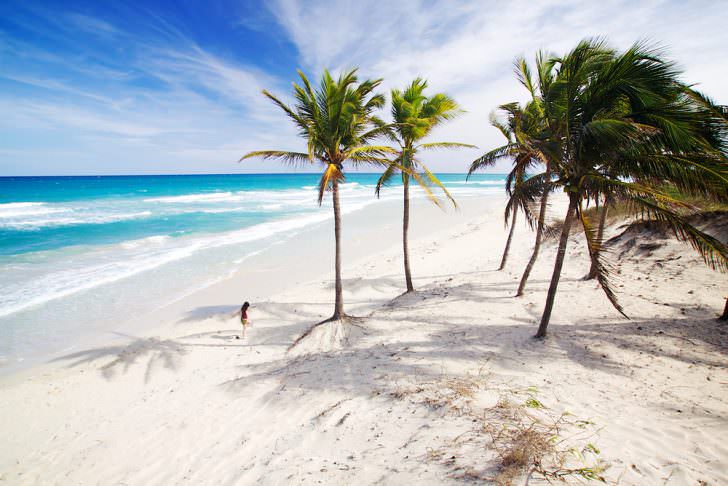 The posh Hotel Nacional may be a bit out of your price range when it comes to finding places to stay for the night, but that doesn’t mean that you shouldn’t visit! This swanky hotel has hosted plenty of diplomats and celebrities over its long history, and you’re sure to feel fancy yourself while strolling its extravagant halls. I loved going with friends and getting drinks out on the patio during the warm summer evenings—it’s a great place to people-watch, and you have an excellent view out over the ocean.

Perhaps most interestingly of all, the hotel is home to a sort of museum of bunkers that were meant to protect against potential military threat. If you’re back from your beach trip early enough, you can explore these out in the lawn during the day and learn a ton about the history of Cuba during the past century—definitely recommended. And the hotel isn’t far from the Anti-imperialist Open Tribune (Tribuna Abierta Antimperialista), which is home to both the American Embassy and a bunch of flag poles that fly the Cuban flag during important state holidays. 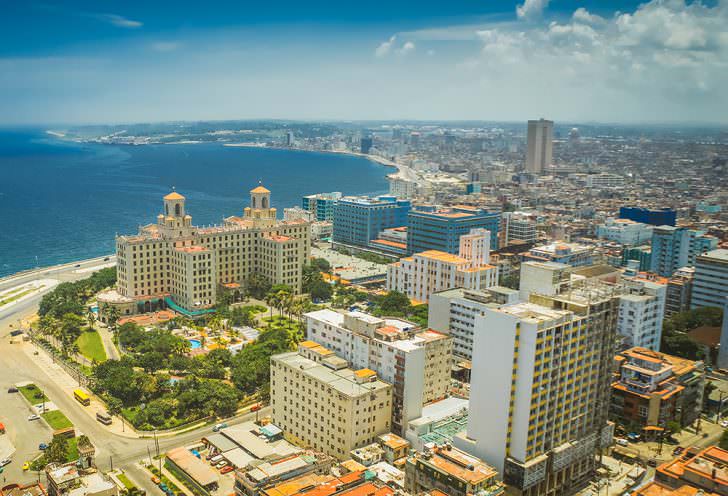 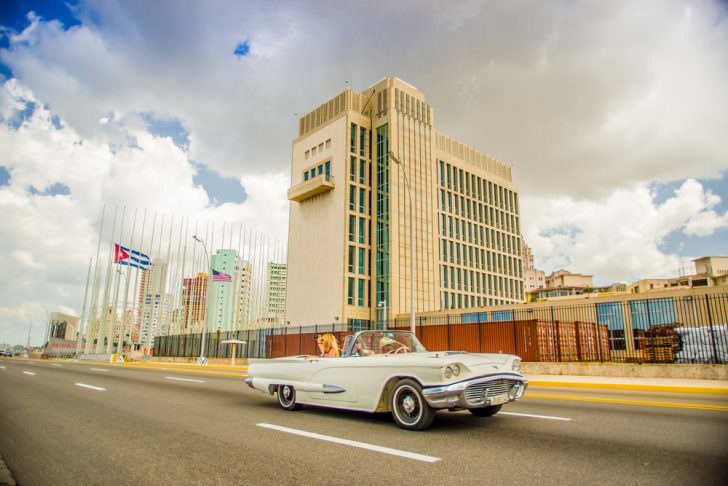 The US embassy in the city of Havana, Cuba. © Fotos593 / Shutterstock, Inc.

As much as I love Old Havana, you don’t want to spend all your time there! Head across the bay and you’ll get a much more authentic view of Cuba—even if all you do is cross the bay on the ferry. But I recommend making a day out of it. Visit Morro Castle and the other battlements meant to protect the bay. If you’re okay with no-frills establishments, this is the place to go out to eat to get a filling meal for a fair price. A typical recommendation is El Canonazo, with its peaceful backyard setting and solid local food. Not only is the ferry across the bay super inexpensive, but you’ll find that prices over here in the less-touristy parts of Havana are markedly cheaper, for everything from food to necessities. 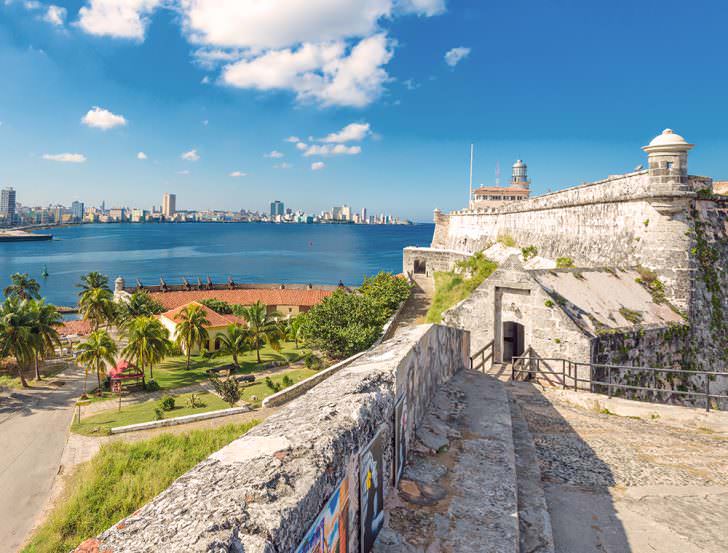 You don’t have to be a student to enjoy the Vedado neighborhood. It’s one of the best areas for art and galleries in the city. The university grounds are impressive enough, but there are tons of other things to do in this part of the city. Definitely make sure you get ice cream while you’re over in the university district. Although there is often a line out the door at Heladería Coppelia, trust me—it’s worth it! The company has been in business since the mid-60s, and they serve out thousands of gallons of ice cream a day. Trust me, in the humid and sticky heat of Cuba, you’ll be amazed at how much better a day is with a bit of ice cream at the end of it. 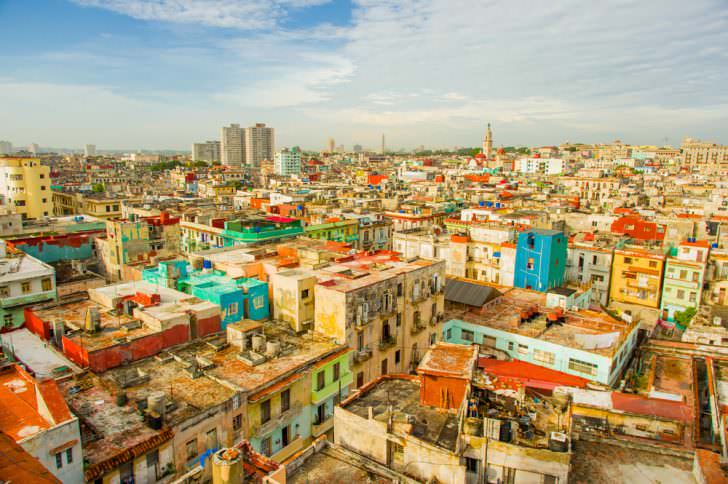 One of my favorite nightlife spots in Havana was the Jazz Café, which is located in Vedado, but you’ll find something to fit every taste in the neighborhood. Or if you’re missing the magic of Old Havana, head back over to the Plaza Vieja, or Old Plaza. It was one of my favorite places to hang out as a student, sipping coffee during the day at one of the cafés or having beers with friends in the evening.

The thing is, a lot of Havana has a distinctly European feel to it, if you know what to look for. And the Plaza Vieja is the pinnacle of that feeling. During the day, I used to spend hours sitting outside the Café el Escorial with cofee, and in the evenings, Factoria comes alive so much so that you’re sure to feel that the entire world has walked past you as you sip at towers of beer. In fact, it’s one of the busiest plazas in all of Cuba, and with the arches and terraces of the surrounding buildings, you’re sure to find a scenic backdrop for your libations. 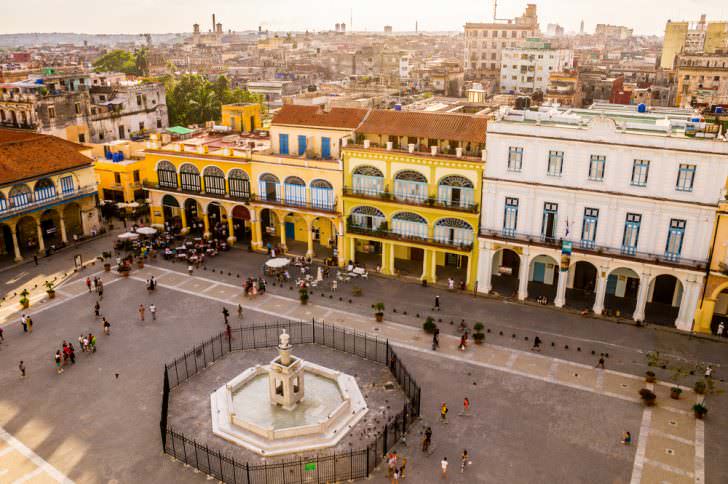 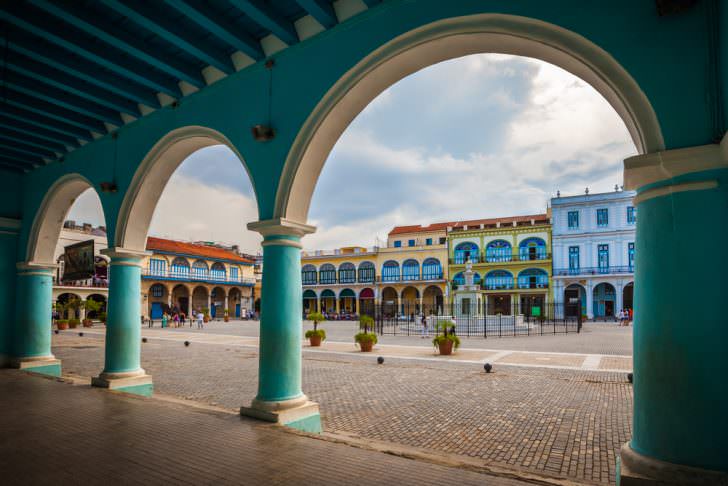 If you weren’t already aware, the American author Ernest Hemingway called Cuba his home for much of his life. In fact, many pieces written by him are based in Cuba! In the morning, take a cab out to Finca la Vigia, Hemingway’s former home, and the Hemingway Museum, both of which are located in San Francisco de Paula.

But there are a few different Hemingway spots to visit in Havana, including the room that he stayed at in the Hotel Ambos Mundos, the Bodegita del Medio (his favorite place to get a mojito), and the Floridita (his favorite place to get a daquiri, which is now home to photographs and a statue of him). Although these drinking wells may be a bit overpriced, it’s fascinating to walk in the footsteps of this famous author and try to see Havana as he saw it. And If you’re a book- or antique-lover, you should also visit the book market in the Plaza de Armas and see if you can pick up a vintage copy of one of Hemingway’s novels—my copy of “El Viejo y El Mar”, or “The Old Man and the Sea” translated into Spanish, is one of my most prized possessions! 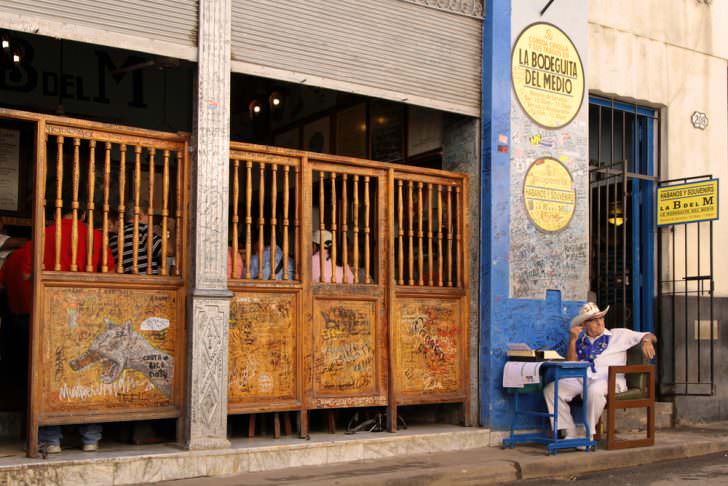 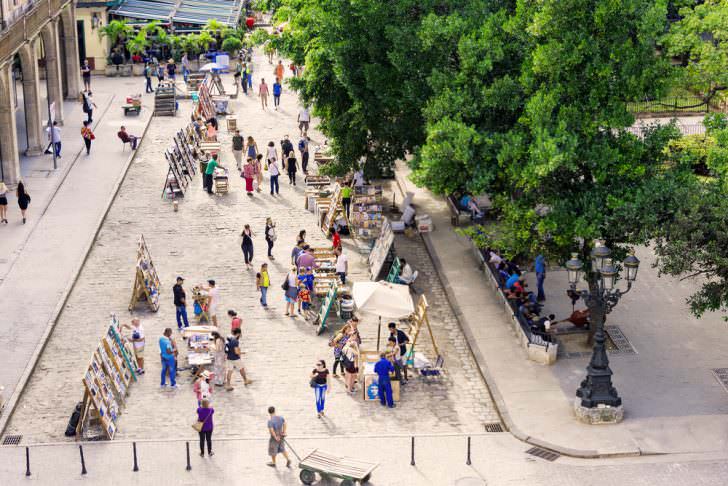 A lot of people who visit Cuba want to bring gifts for locals, and although school supplies or medical supplies are always a great choice, I really wished when I was there that I had brought a bunch of tennis balls with me. The reason? Most of the children we encountered in the streets were playing with balls of rags or other makeshift types of balls. So when my mother went to Cuba a little while after me, that was my recommendation. And sure enough, those tennis balls delighted children all around Havana—plus, she found that they were a great conversation starter with locals. So if you have a little extra space in your suitcase, throw a few tennis balls in there!

Although there’s tons to explore during your trip to Havana, hopefully this list inspires you to go there now rather than later! Have you been to Havana? What were your favorite experiences? Share in the comments below!