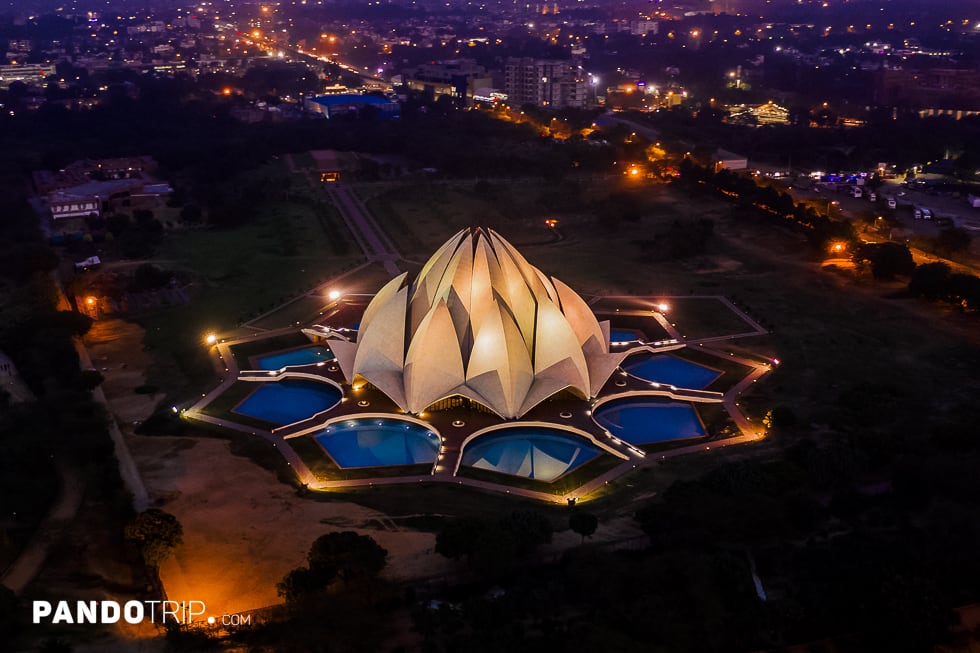 Lotus Temple (also known as Baháʼí House of Worship) is one of the most unique buildings in the world. It resembles a floating lotus, which happens to be Indian national flower. The lotus symbolizes spirituality, wealth and knowledge and has been a symbol of Indian culture since ancient times.

Situated in India’s capital New Delhi, the magnificent structure sees around 4.5 million visitors each year, whether worshippers or tourists looking to scratch it off their bucket list.

As one of the seven temples of the Bahá’í religion, spread across the globe, the Lotus Temple welcomes everyone, regardless of religion, race, sex, or class. Due to its similarities to the 17th-century Taj Mahal, this architectural splendor is often referred to as the 20th-century Taj Mahal.

Here is everything you need to know about one of the most visited buildings in the world.

Built in 1986 by Iranian architect Fariborz Sahba, the Lotus Temple is an iconic symbol of modern Indian architecture. The style is known as expressionism, characterized by non-traditional and asymmetrical designs.

It took Sahba ten years to design and build the temple. However, his hard work paid off as he won many awards for his masterpiece. His Lotus Temple design even got in the Guinness Book of World Records for being the tallest lotus-like building at 131.3 ft (40 m).

Sahba was not alone on this journey. Although he was the chief architect, he had a team of 800 engineers, technicians and artisans working together to create this architectural marvel in Delhi.

The Lotus Temple plan was truly a masterpiece. Architect Sahba designed it to look like a half-opened lotus flower with 27 petals. The entire structure was built with 10,000 different sizes of marble (the same one used to construct ancient monuments, like the Parthenon).

But realizing the Lotus Temple plan was hard work for everyone. It took them 48 hours of continuous work to do the petals of the lotus flower. The reason was to avoid construction joints.

Nine ponds surround the building, representing the floating leaves of the lotus flower. Besides giving the exterior an aesthetic look, they also help ventilate and keep the temple cool. In between the ponds are paths with curved balustrades, bridges, and stairs, adding to the grandeur of this magnificent structure.

The Lotus Temple plan allows for the structure to look and function just as well from the inside. Spread across 26.5 acres (107,241 sq. meters) of land, the Baháʼí House of Worship consists of several buildings.

This includes the House of Worship (home to the library, conference hall, and administrative building), the Information Centre, and the Education Centre, which opened in 2017.

The entire temple is made of white marble, brought especially from Penteli Mountain in Greece. This is the same marble used to build the Parthenon and the other Baháʼí House of Worship.

The main assembly or the central hall of the temple is also in the shape of a lotus flower. It is 40 meters tall and can accommodate around 2500 people, but it has a seating capacity of only 1300 people. There are nine entrances to the main hall, all surrounded by gardens and ponds.

Located close to Nehru Place, in Bhapur, New Delhi village, you can get to the temple in a few ways. One way is by metro. The closest metro stations are Kalkaji Mandir on the Violet line, and Okhla NSIC station on the magenta line.

The other means of transportation is the railway. New Delhi Railway Station is just 9.59 miles (15.4 km) away from the Bahá’í House of Worship. You can get a taxi or an auto rickshaw from here, and you’ll be at the temple in about 40 minutes.

The best season to visit the Lotus Temple is from October to March. That is wintertime in India, and the weather is pleasant and less humid.

The Baháʼí House of Worship is open for visitors every day except Mondays, from 8am to 6pm.

Although large (the temple sits on 26.5 acres (107,241 sq. meters) of land), it takes about two hours to cover it all. This includes the interior and exterior and spending time worshipping, praying, or meditating.

Worshippers gather at the Baháʼí House of Worship to pray and read from different Holy Scriptures. The prayer services are about 15 minutes long. They take place at 10am, 12pm, 3pm and the last is at 5pm.

All visitors must remain silent while in the prayer hall. Even if you are not a worshipper, it’s a beautiful experience to listen to the chanting and be a part of it all.

Entry to the Baháʼí House of Worship is free for people from all walks of life.