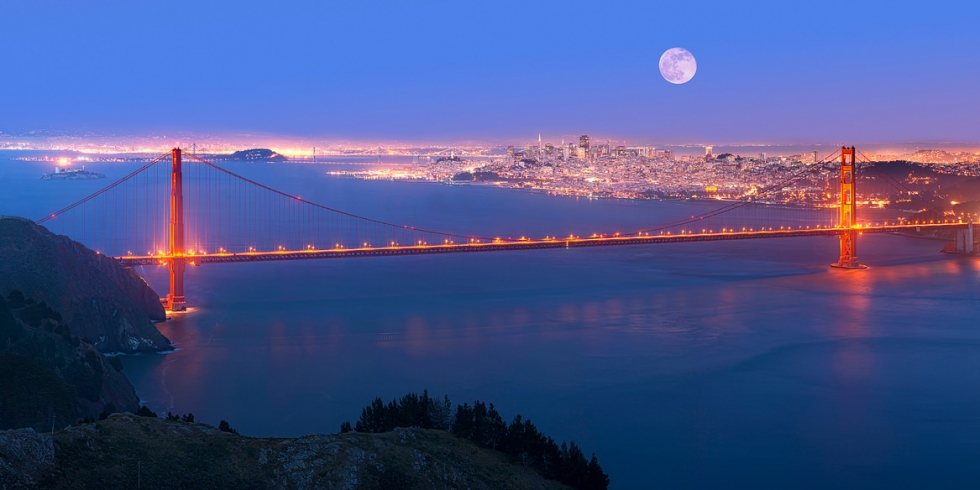 San Francisco – the legendary city on the West Coast, known for its bohemian atmosphere, attracts visitors from all around the world. There are many amazing things to see, people are friendly and you will always recognize a local by the big smile on her or his face. See the 10 sites we chose for you to visit once in San Francisco.

The famous steep street has eight very sharp turns and is certainly one of the most popular streets. Rent a car or get a cab and have a ride in this scenic place. The speed allowed in this one-way section is only 8 km/h (5 mph).

You can also hop off the cable car at the top of the hill and walk down the street.

The place from where the breathtaking panorama opens. 64 m (210-foot) tall art deco Coit Tower was built in 1933. Inside the visitors get to admire murals, inspired by Diego Riviera’s work: after his murals were destroyed in Rockefeller Center, the protestors in San Francisco stood up for him by making references to his work inside of Coit Tower.

The tower is on the Telegraph Hill, in Pioneer Park, which is also beautiful.
Take a scenic hike to the tower, since parking is limited.

San Francisco cable car system is definitely one of the favorite signatures of the city. You won’t find any better way to spent $2 than hopping on the trolley and experiencing this iconic ride. The best way getting around and over the steep hills.

Take the trolley from Embarcadero to Castro – probably the most scenic ride.

Tonga Room & Hurricane Bar in the Fairmont San Francisco was established in 1945. Besides the Asian cuisine and exotic cocktails, the interior is another thing that attracts locals and tourists: the rain starts pouring into the pool, while guests are enjoying their dinner! At least Anthony Bourdain did.

Arrange reservations since the bar is really popular.

Did you know that San Francisco’s park is bigger then New York’s! There are plenty of activities to do and see: Dutch windmills, a buffalo herd, boating, museums, Japanese Tea Garden – all you need is time to experience it all.

It is best to get to the park by car, cab or trolley.
Conservatory of Flowers is the oldest Victorian greenhouse outside of Great Britain.

A modern interactive science museum is another most popular attraction. It also has two most photographed sites: lagoon and an outside rotunda. It is fun, educational and definitely worth exploring.

Suitable not only for adults, but for kids, as well.

Another world wide known icon – the legendary prison. The visitors are offered many different tours around the island and inside of the prison. Besides the historic significance, taking the fairy reveals a beautiful San Francisco’s skyline and a view of Golden Gate bridge.

The early tours are the least crowded.

The legendary district is a home for the hippie movement. Later the Victorian houses were bought by yuppies and they established many chic boutiques, restaurants and cafés. Amoeba Music store, which houses the biggest collection of music CDs, is found here. The atmosphere of the area remains bohemian, though.

See „Painted ladies“ – the Victorian and Edwardian houses.
Visit the Haight-Ashbury Street Fair, which takes place on the second Sunday of June annually.

The oldest Chinatown in North America and the biggest Chinese community outside China – this is the place not to miss once in San Francisco. The architecture is an American version of Chinese design. The shops, restaurants, the whole atmosphere will certainly make you think you are in China.

The signature site of SF, the engineering wonder – Golden Gate Bridge not only looks great from the side. It also offers one of the greatest walks in USA. According to the sources, it is the most recognizable and photographed bridge in the world.

Walk the bridge when it is not too windy.