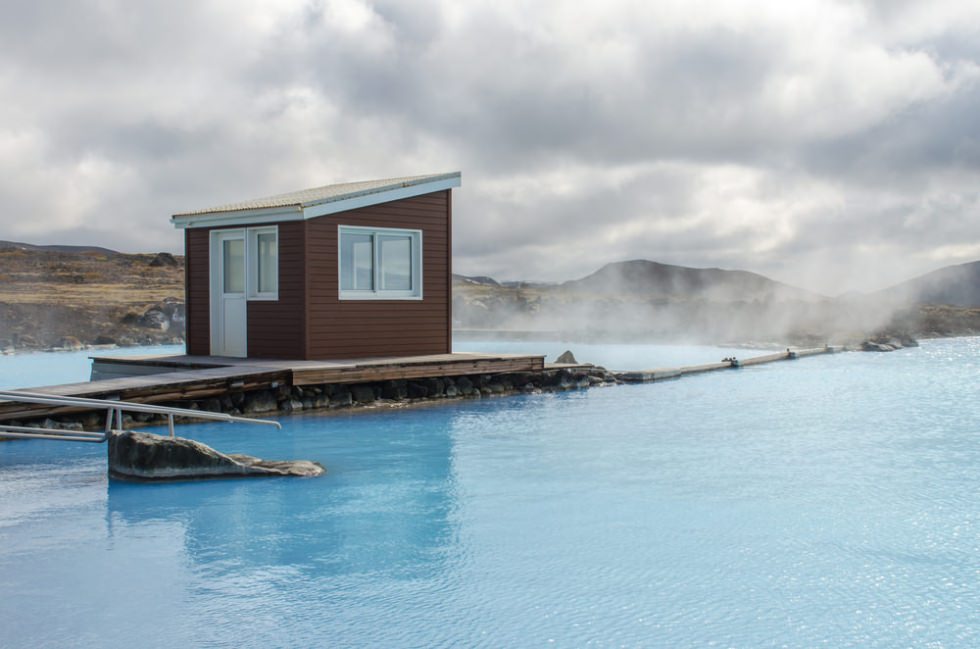 Iceland is an incredibly popular place to travel to at the moment, especially during the country’s peak travel season (mid-June through August). But that said, it can be an expensive place to visit as well. Especially if you’re looking to stay in Reykjavik and travel to many of the main tourist attractions, you’ll find that your wallet will be hurting after only a few days there—even if you’re a cheap, dirty backpacker staying in a little hole-in-the-wall accommodation and cooking your own meals!

In fact, the cheapest tickets for the Blue Lagoon—just one of the main tourist attractions—cost nearly $50 per person, and this is for a no-frills ticket during the off-season, after you’ve also paid for transportation to actually get to the place! And this is not to mention the fact that with so many people hopping flights to Iceland these days, places like the Blue Lagoon tend to get crowded.

So without further ado, here’s a list of better alternatives to the Blue Lagoon that you can visit during your trip:

I list this one first not because it’s the best alternative but because it’s the easiest by far to visit. In fact, it’s located right in Reykjavik, albeit all the way on the fringes of the city. One thing to be aware of is that it’s pretty small—only a few people can fit in it at a time. This means that it’s entirely possible that you’ll show up and find it already at full capacity, and your choices then will be to wait until it clears out or head on to the next place. But if you’re willing to take that chance, it can be a great place to relax for a little while. Anyway, the pool is located close to Grotta Island and the lighthouse there, which is a pretty place for a picture if nothing else! 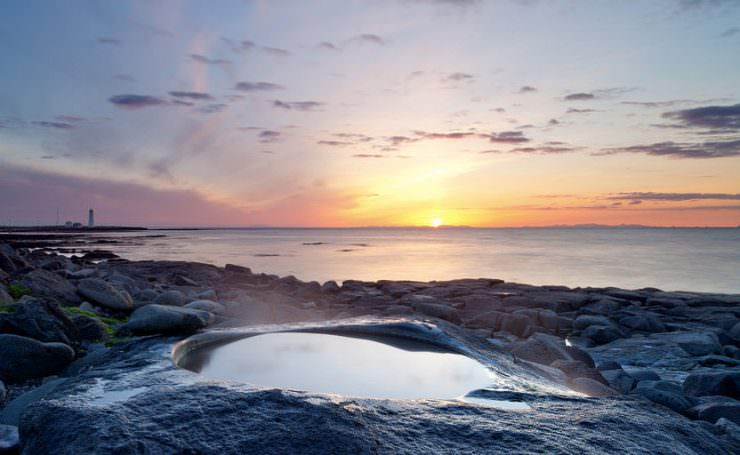 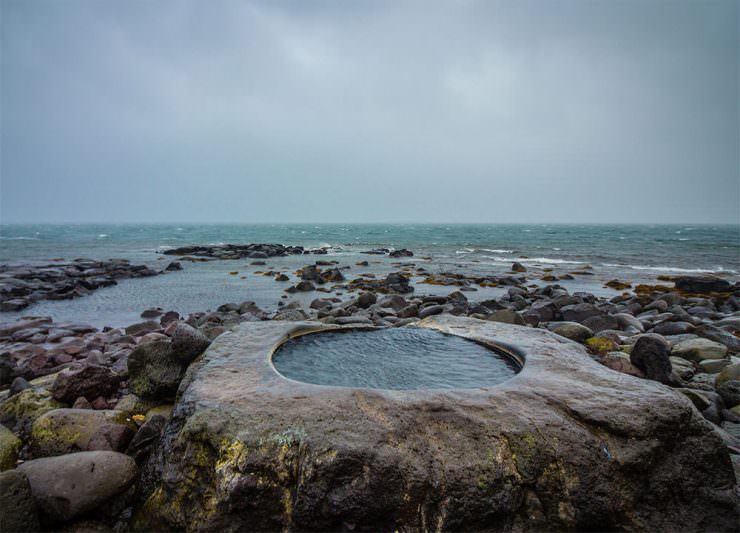 Seljavallalaug is the oldest man-made hot spring in all of Iceland. It was built in the early 1920s, and not much has changed about the place since, other than the new pool that was put in back in 1990. The old pool doesn’t tend to run as hot as some of the other springs in Iceland—typically, it tends to run somewhere between 70-85˚F (20-30˚C). This makes it more like a swimming pool than like a geothermal hot spring. However, pool is free to swim in, and you’ll have no complaints about the view! 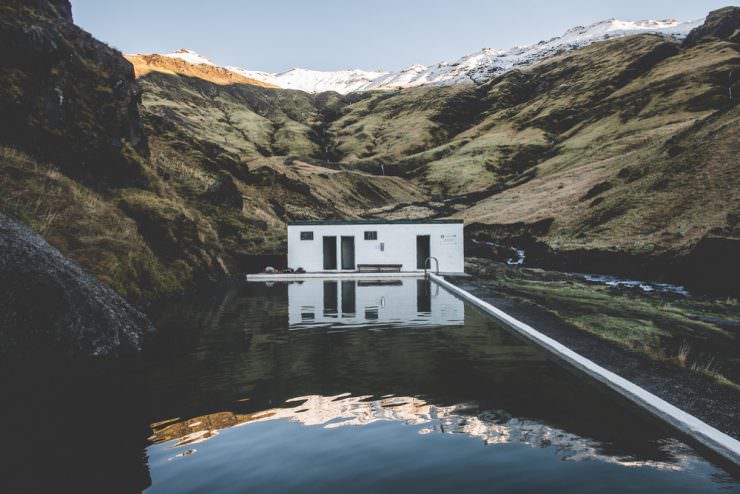 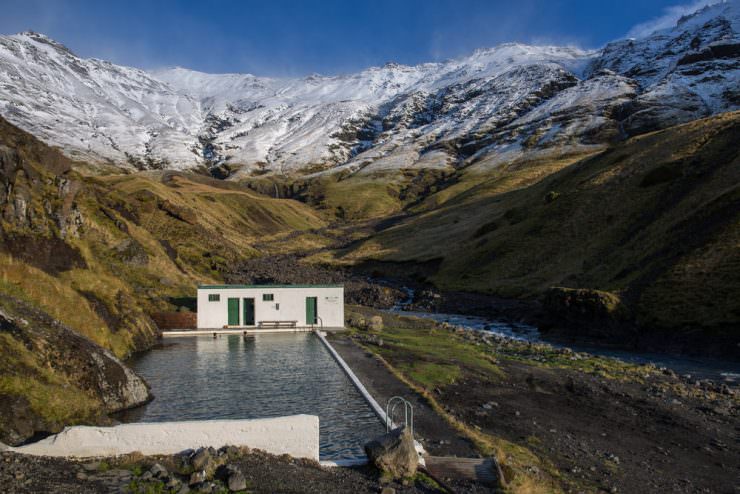 This hot stream is located nearly the same distance from Reykjavik as the Blue Lagoon (that is, nearly an hour’s drive) but you’ll head east instead of southwest to reach it. It takes a bit of a hike to reach Reykjadalur, but it’s definitely worth it—and just think: you’re going to be relaxing all of that exertion away anyways. Remember, this is a natural stream, and that means that water temperatures can vary; make sure that you’re paying attention to the boardwalks and testing the water before jumping in! Another thing to note is that this is a more rustic option than the Blue Lagoon—and that means there are no changing rooms or restaurants to be found! But for the more adventurous, these warm waters are much less crowded and every bit as soothing as those of the Blue Lagoon. And best of all, they’re free to enjoy! 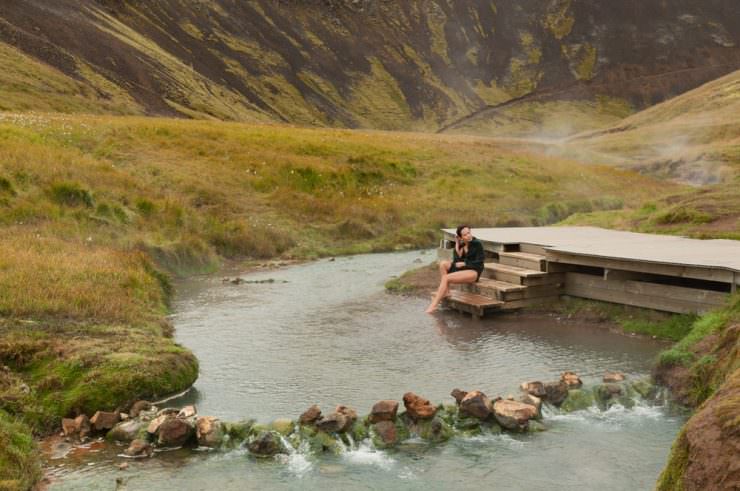 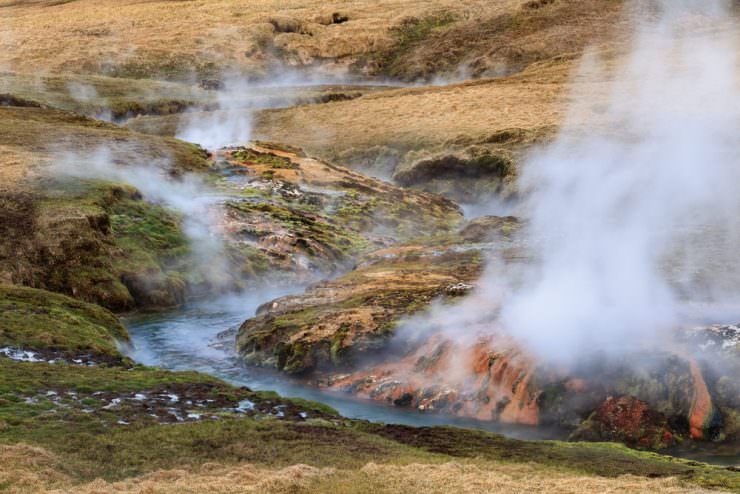 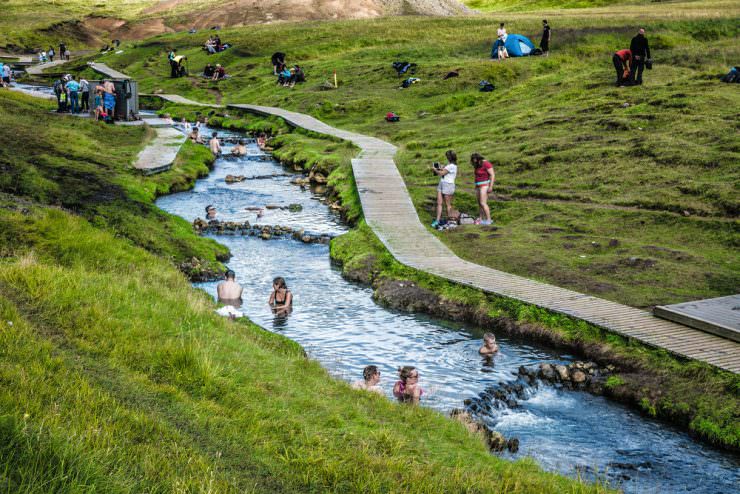 If you think the Blue Lagoon’s blue waters and volcanic rocks make for a pretty backdrop for your soak, they’ve got nothing on Grjotagja, which featured in a Game of Thrones episode—and where you’ll find yourself bathing in hot springs down inside of a cave! (Just make sure you bring a flashlight so you can find your clothes afterwards.) The unfortunate thing about this spot is that the water doesn’t stay a constant temperature, and sometimes it can simply be too hot to bathe in the water. But especially during the winter, it’s frequently possible to take a dip. To visit, make your way to the village of Reykjahlíð. Know that you’ll need to walk the final distance to the caves. 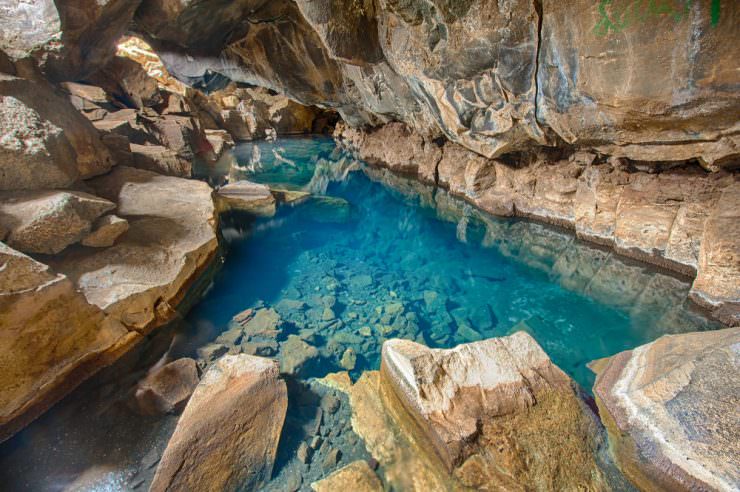 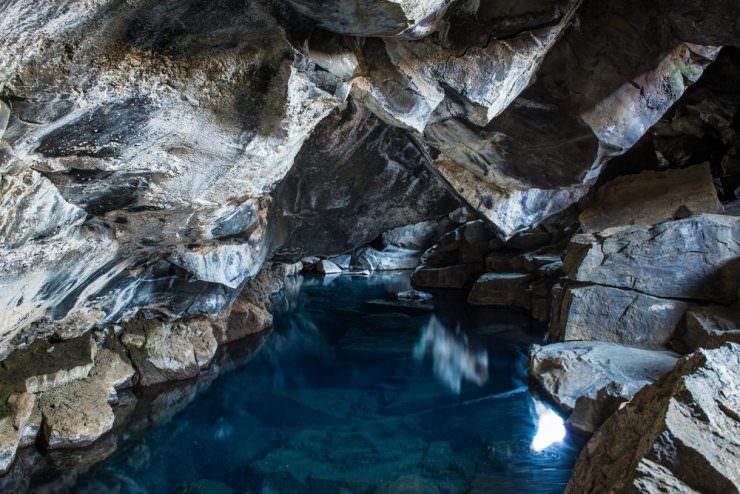 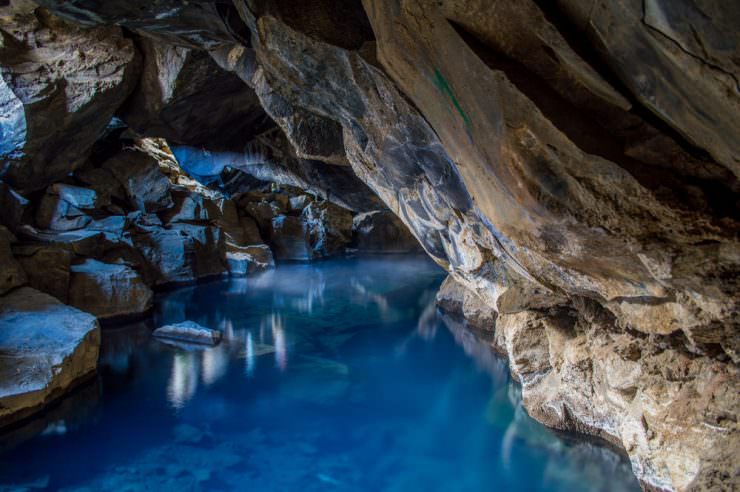 If you plan to visit this hot spring, know that you will probably want to book a guided tour—but that it will be very worth it. From its geologically-interesting mountains to the sheep grazing nearby, this hot spring is incredibly scenic. But at a few hours’ drive from Reykjavik along poorly-paved roads (which sometimes flood a little), you’ll definitely need to have a vehicle with off-road capabilities. The pools can get crowded, but there are changing facilities on-site and it’s free to take a dip—and hey, the adventure is in the journey, right? 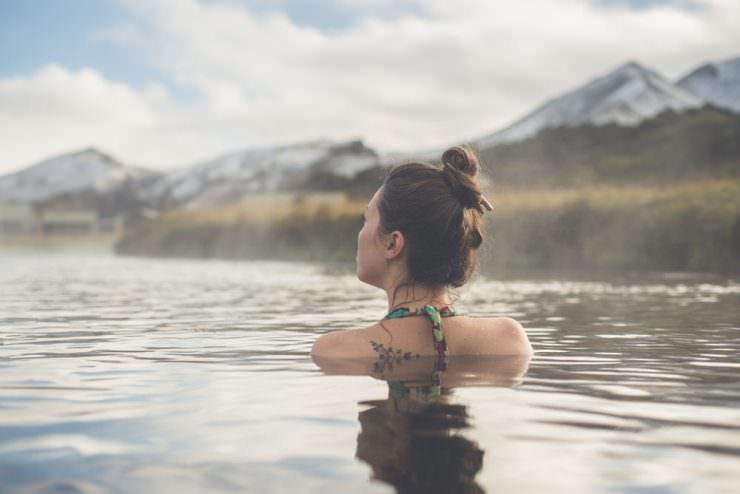 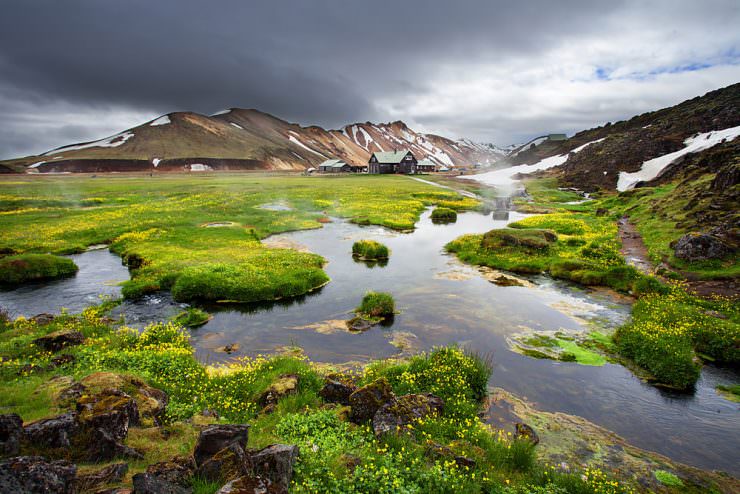 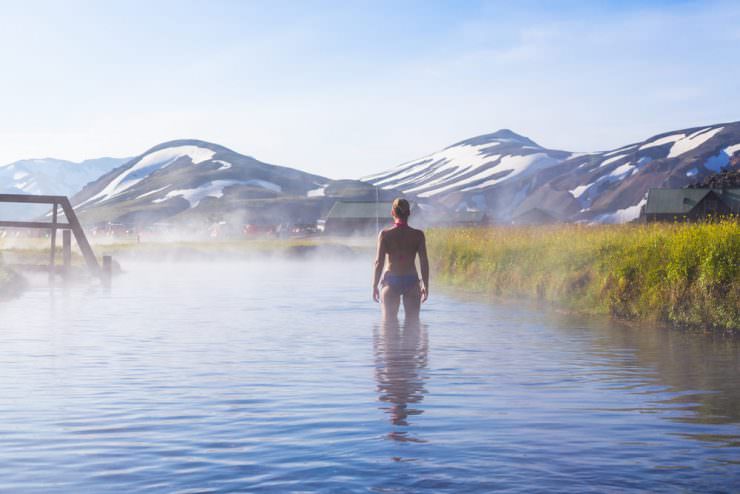 If you’re not comfortable driving a 4×4, don’t even think about venturing out to this hot spring. But if you have the vehicle capabilities (or you can hire a good guide), it’s well worth it for the scientific interest as well as the bathing. The hot spring that you’ll be bathing at in Laugafellslaug is actually formed where two rivers—one piping hot and the other a bit colder—flow together, creating a pool of water that’s perfect for taking a soothing dip in. There’s literally nothing in the area—in fact, the bath is located out on a large swath of farmland! But as long as you are respectful and get the farmer’s permission prior to bathing, you can be sure to have a wonderful, undisturbed soak. 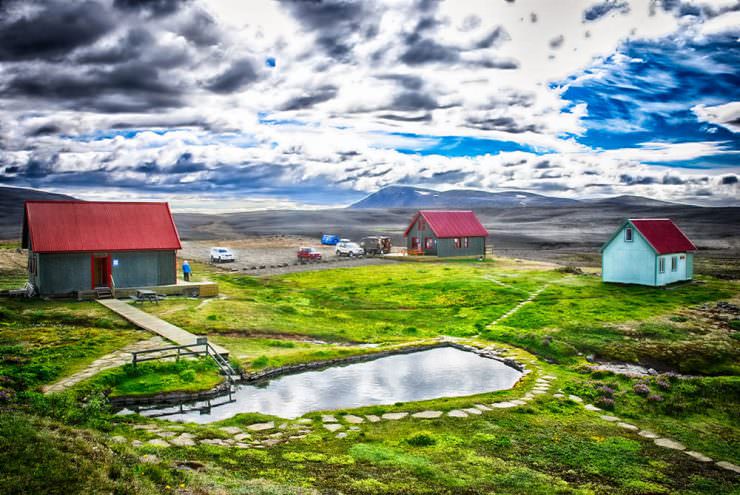 Let’s face it, a huge reason why people come to Iceland is because of the incredible landscapes. So why not combine your soak in the hot springs with a view that’s something to write home about as well? The thing that’s most appealing about Hveravellir is that it’s set basically out in the middle of one impressive sweep of landscape, which includes glaciers and steaming water holes, far removed from pretty much anything else. There’s great hiking and horseback riding in the area as well, plus they’ve even got a campsite so you can really get off the grid for a few days and relax! 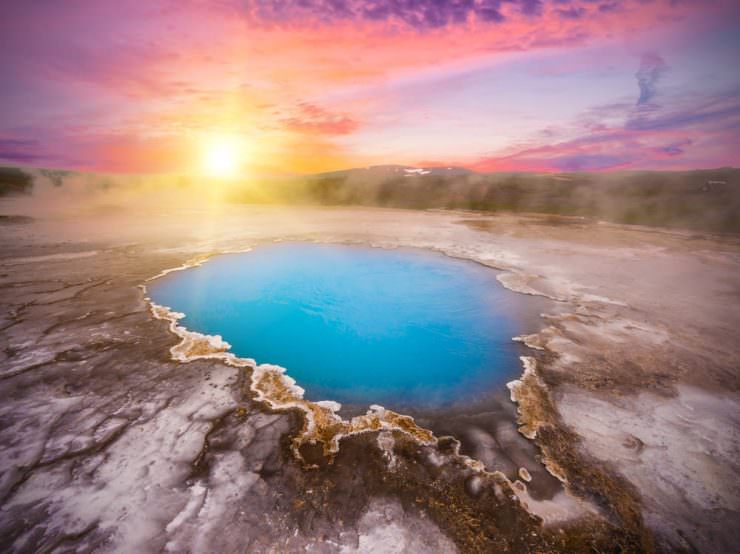 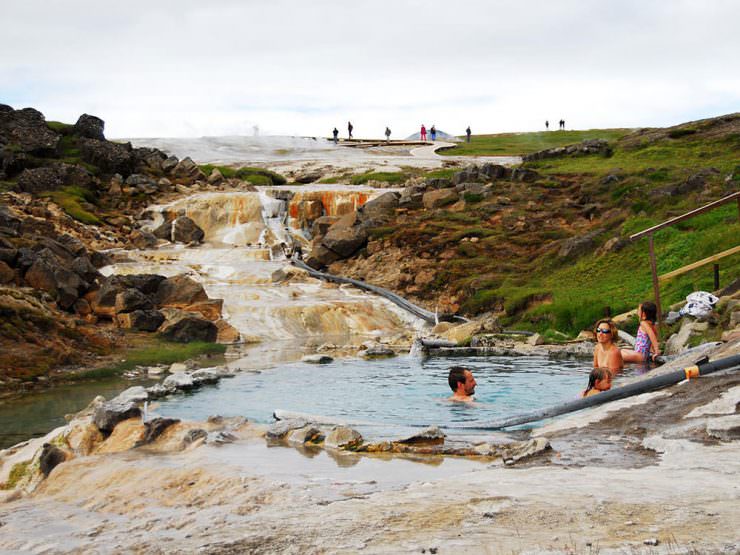 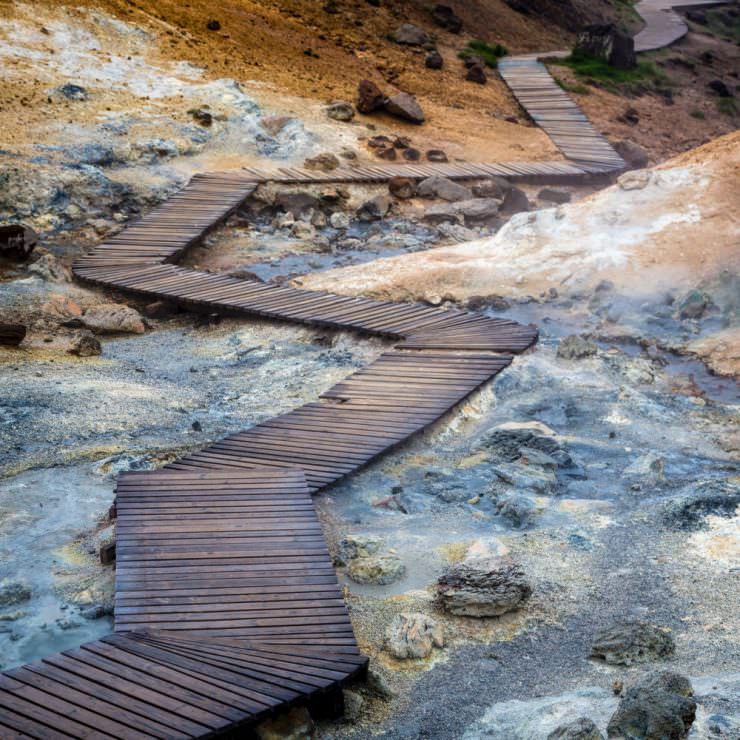 Although this hot spring isn’t quite an infinity pool, you’re up on the northern end of the country and the ocean is right there, a stone’s throw away from the pool. The pool is named for the Icelandic hero Grettir Asmundsson, who is said to have fought monsters and survived for an extensive period of time as an outlaw, amongst other things. The pool isn’t very large, but again, the scenery will really take your breath away—and it’s free to visit! Why not sit and contemplate the stars and relax away your exertions, as Grettir is said to have once done? You certainly won’t regret the trip! 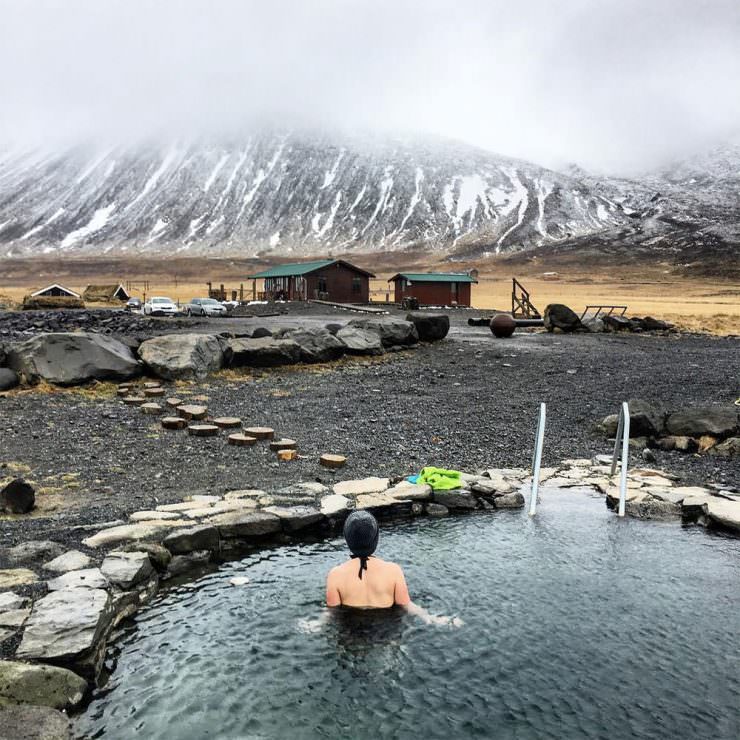 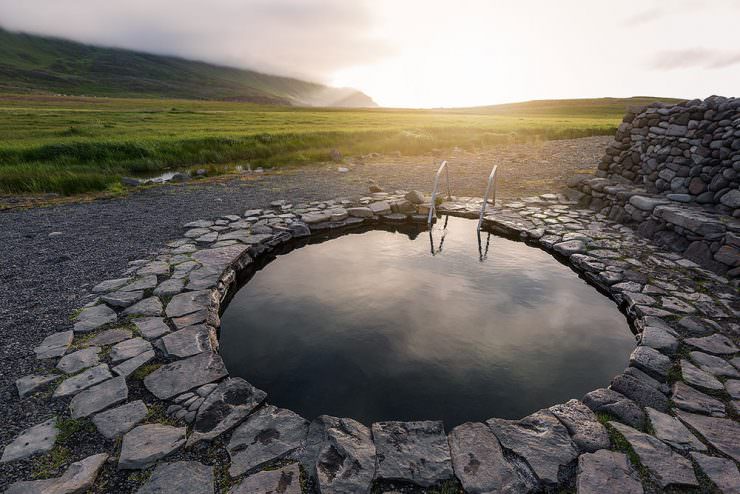 This man-made pool may lack the picturesque water and scenery of the Blue Lagoon, but you’ll still enjoy floating in the warm, naturally-heated waters of Secret Lagoon. It’s not nearly as luxurious as the Blue Lagoon, but that’s reflected in the prices—which are about a third of what the Blue Lagoon charges. And they still have changing rooms and other basic amenities, so really, you’ll want for naught! It’s location near to the Golden Circle Route means that it shouldn’t be too far out of your way if you’re doing the typical route around the countryside. And even if you’re not planning to do the whole circle, it’s well worth heading out to this hot spring: it doesn’t have nearly the crowds that the Blue Lagoon receives, and during the winter, guests have regularly been lucky enough to see the Northern Lights during their soak! 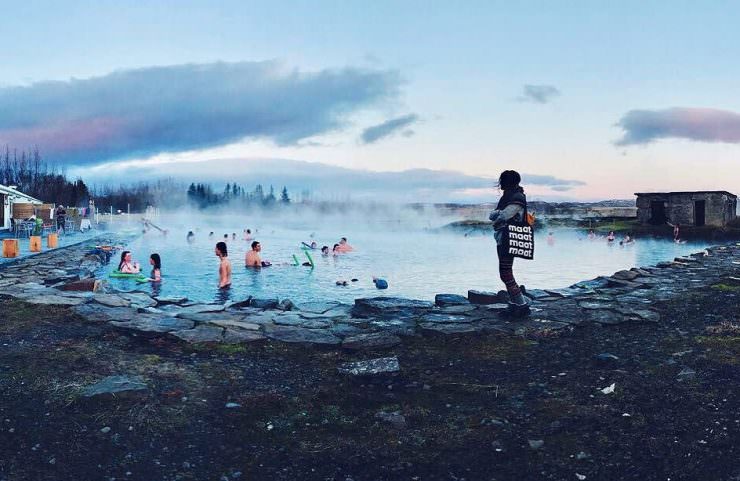 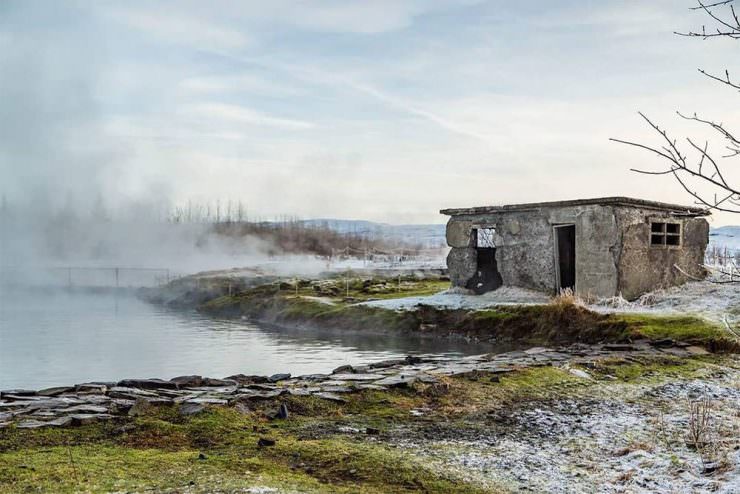 Although this option isn’t the cheapest on the list, the Myvatn Nature Baths cost about half the price of the Blue Lagoon, and they were created in the same manner: with waters colored by the nearby geothermal plant—so it’s probably the most exact alternative that you can find! The baths are kind of set out in the middle of nowhere, halfway between Akureyri and Egilsstadir, in the north of the country. This means, you’re probably going to need a car to reach them—but you’ll run into fewer tourists banging elbows with you in the pool. And if you’re really lucky, you might have the chance to see Aurora Borealis while you’re that far north! 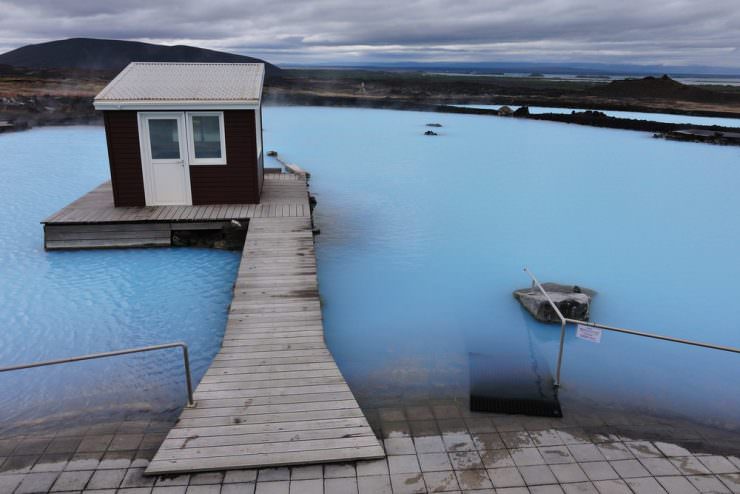 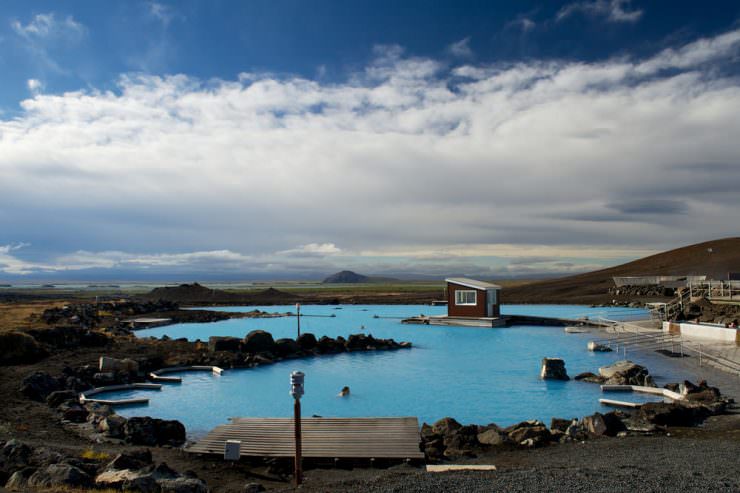 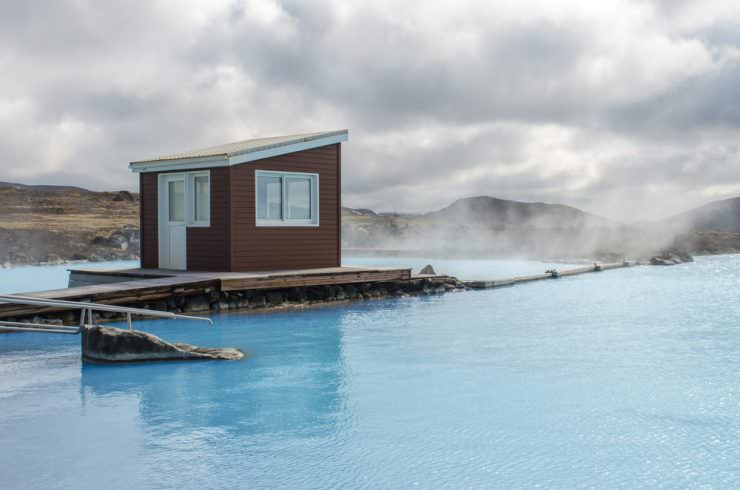 Although there’s no denying that Iceland’s Blue Lagoon is quite the experience, the oft-overcrowded waters and the steep admission price can make the trip more of a headache than it’s supposed to be. If you’re looking for some real relaxation during your trip, you can’t beat the warm, gentle waters of these other places in Iceland—which can often be even more soul-soothing than the Blue Lagoon given their remoteness and solitude.