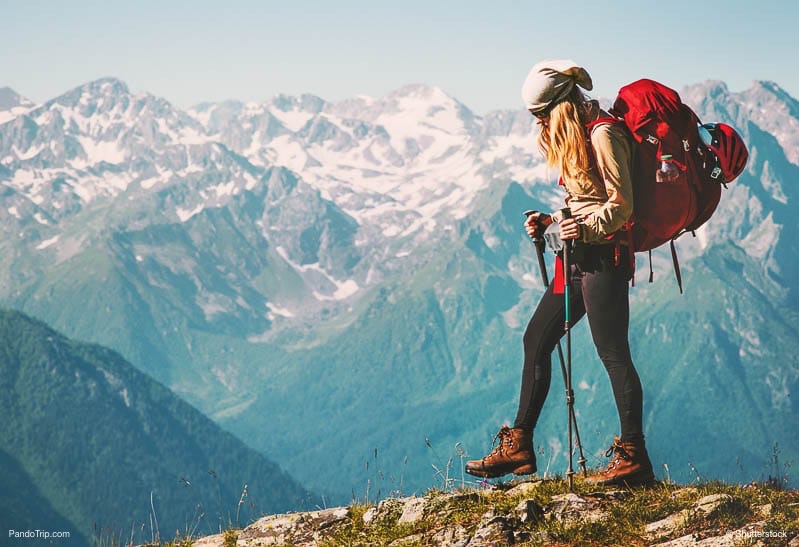 I love traveling with just a backpack, rather than a suitcase or any other type of luggage. Why? It’s incredibly versatile, allowing you to squeeze on buses, wander around cities, and shove it between beds in a cramped hostel room. Plus, if you pick the right backpack for you and pack smart, there’s no reason why you have to feel like it’s weighing you down. There are so many backpacks out there, though, that picking the right backpack for you can be a little tricky, especially if you’ve never gone shopping for this type of gear before. So where do you even start?

The first thing to do when you’re deciding which backpack is right for you is to figure out what you really need. Here’s a bit of a breakdown of things to make note of:

Well, it depends on what you’re doing. The thing is, generally, if you have the space, you tend to fill it: you’ll likely pick up clothes or souvenirs and trinkets along the road, and rather than getting rid of other things to make space, you’ll just keep stuffing your pack until it’s full. This can lead to carrying a lot of weight around with you, which cuts down on that versatility factor that I mentioned before. After two years of schlepping around a 70L pack, I finally decided enough was enough and downsized to 40L (which has the added benefit of counting as a carry-on bag, rather than checked luggage!).

What you end up with is a matter of personal preference, but I personally wouldn’t go much above 55L, unless you’re doing some serious backcountry trekking (like the Appalachian Trail). And anything about 43L and under will generally count as a carry-on bag, so if you’ll be flying a lot, this could help you save on airline fees! 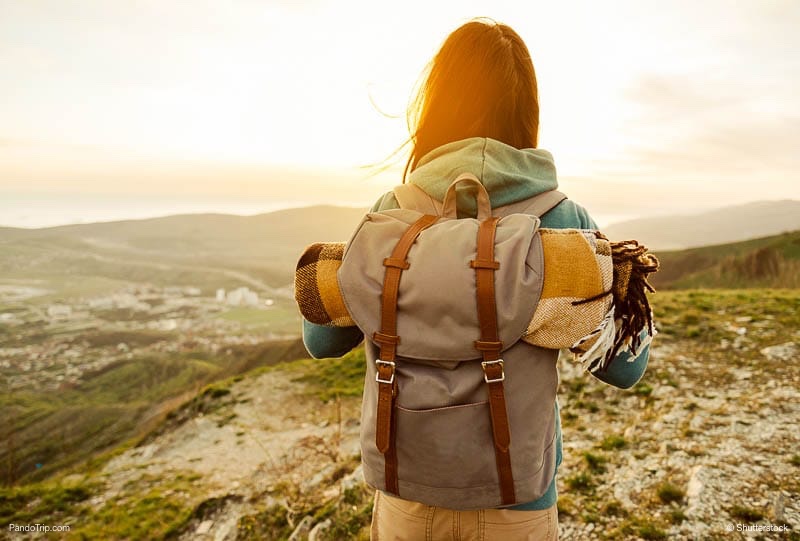 2. Men’s versus Women’s – There’s a huge difference in how men and women are built. Generally, men tend to carry weight in their shoulders, while women tend to carry weight best when it’s balanced around their hips (which are generally wider than a guy’s hips). Plus, women tend to have narrower shoulders and more slender torsos. Men’s and women’s bags aren’t just different in terms of colors; they also take these different physiological aspects into account. That’s not to say that you shouldn’t bother trying on men’s bags, of course. But I have yet to find a men’s bag that fit more comfortably for me than the women’s version of the same bag.

3. Zippers – There are two main types of bags out there: top-loading and front-loading. Top-loading means exactly what it says: the bag loads from the top. This means that if you have something down in the bottom of your bag, you have to dig through everything else to reach it. More and more bags these days are what is known as front-loading, meaning that they typically have either a zipper that goes all the way around the front of the bag or else have a zipper at the top of the bag and one at the bottom so that your things can be accessed from either end.

4. Daypack-inclusive – A daypack-inclusive bag has a separate daypack that can be unzipped from the main bag to be used for touring around the city during the day. When I bought my first pack, I was convinced that I wanted one of these, but when it came down to purchase time, I couldn’t find a pack that I really loved which was also daypack-inclusive. What I ended up doing instead was purchasing a small backpack that folded up into a little pouch and shoving that into my bag. To this day, that’s still the way I’m traveling—and I prefer it that way, since it cuts down on the amount that I can pack, ensuring that my bag stays relatively lightweight! Again, if you have the space, you have a tendency to fill it… 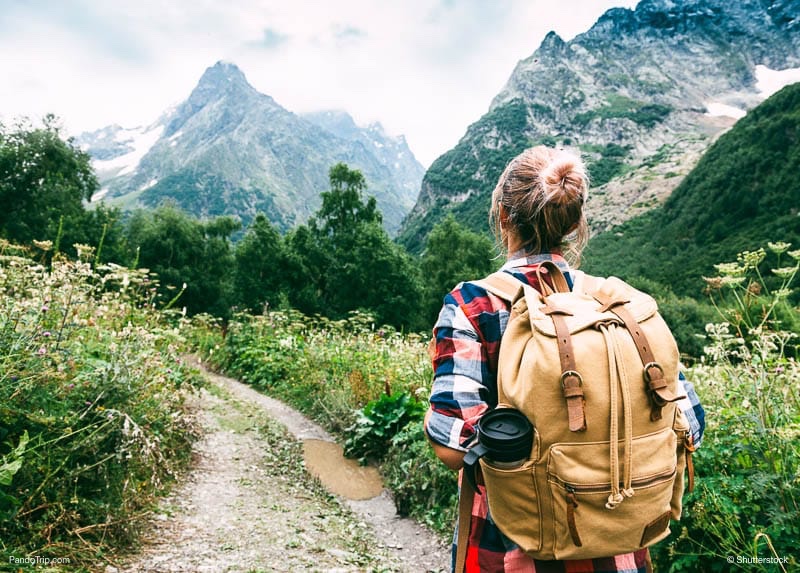 5. Brand – Honestly, I don’t think that brand is such a big deal when it comes to bags. Sure, you may not want to go with a brand that you’ve never heard of, but whether it’s Osprey or Kelty or even an outdoors store-brand such as REI or The North Face… They’re basically all built for durability, and each has its pros and cons. Remember again, you’re looking for the best bag for you, so shop around and see what you can find.

6. Cost – Unfortunately, backpacks tend to be a bit pricey—but if you do your research well and take good care of the bag that you buy, you could find that your bag lasts you five or even ten years, so it’s definitely a worthwhile investment to make. It’s good to set out with a rough budget in mind, but if you can’t find a bag that feels comfortable and is within your price range, it may be worth holding off and purchasing a bag that fits better at a later date—the last thing you want is to make every transit feel like hell because you can’t stand schlepping your bag for more than twenty feet! 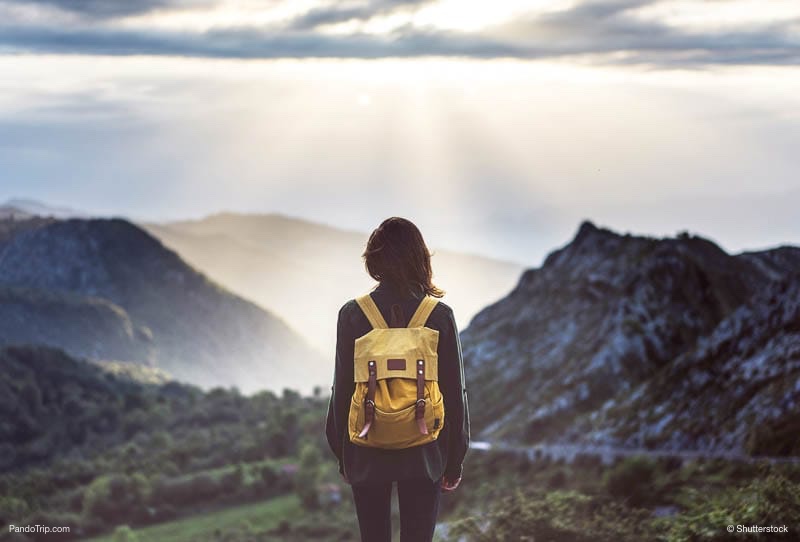 Before we get into specific bags, a word of advice: try them out before you buy them. What follows next will give you some guidelines of which bag might be best suited for you, but the only way you’re going to really pick the perfect bag for you is to go try them out.

How do I do that?, you might be asking. Simple: rock up to your nearest athletic or backpacking shop, and they’ll probably let you not only try on the bags, but they’ll load the bags up with pillows and weights to simulate a full load, and then you can wander around the store for a while to really get a feel for how the bag handles. Set aside a few hours on an afternoon and give it a try—it could be the bag that you thought you’d love isn’t actually all that comfortable. Or it could be that trying multiple bags on in the store really cements your feeling that that is the perfect bag for you.

I’m not saying that you have to buy directly from the shop—it could be that you find a better price online—but you should definitely at least consider trying bags on prior to purchasing; you might be surprised at what you find out. 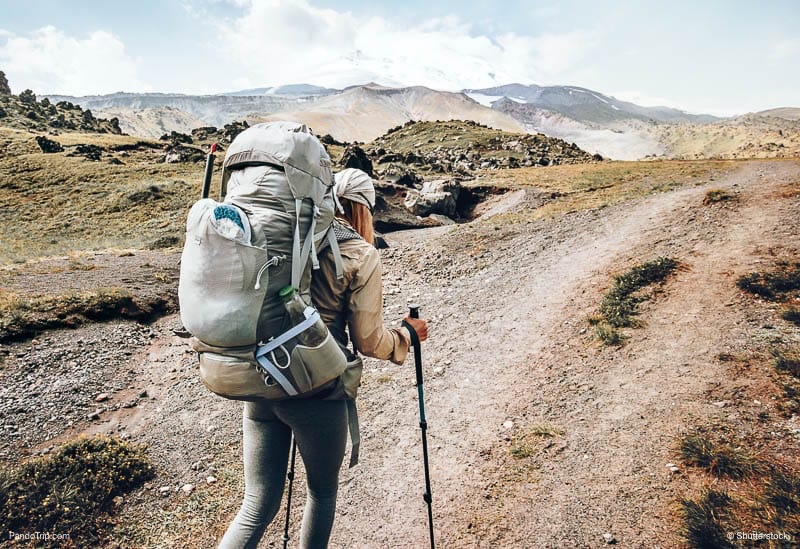 The following bags offer some ideas for picking the right bag for you based on your body type. Of course, everyone’s body type is slightly different, and it never hurts to try on bags that are listed in a different category—if nothing else, you might have one of those ah-hah moments where you realize that you really did love that other bag. But these are some rough ideas to help you get started in your search:

Probably the most common bag brand that I see out there is Osprey, and there’s a reason for that: they make a very durable set of bags…which tend to fit someone with an average-length torso and average-width hips. Many women—and men—rave about how well Osprey’s bags fit them, and they have a huge line of products that make them perfect for you, whether you’re planning to go backpacking through Europe, thru-hiking in the US, roughing it around South America, or anything in between!

and Ariel 55 or 65 are among the three most popular Osprey bags out there due to their respective sizes, but most outdoors shops tend to carry a pretty wide range of Osprey bags, knowing how popular the brand is at the moment, so again, it’s worth shopping around and trying on a few different models to find the one that best suits you. 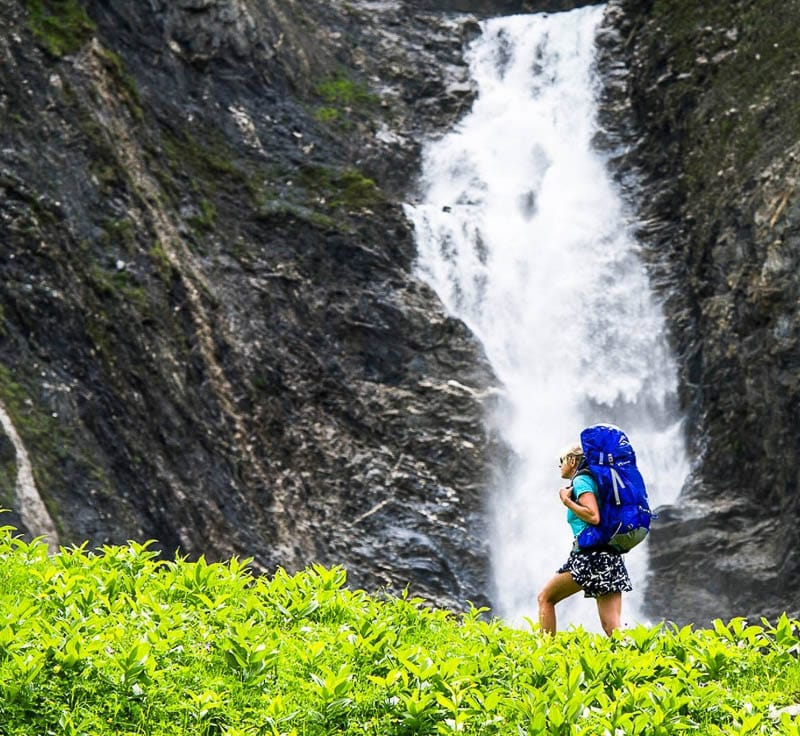 Although it is generally the case that women have more narrow shoulders than men, that’s not always the case! If you try on a bag and find that the straps are cutting into your neck, you may want to try on something with straps that are set a little wide. There’s a couple different things that you can do in this case. First, try to find the equivalent of the women’s bag in the men’s line of products.

However, you may also want to look into Gregory’s bags, which tend to have the shoulder straps set a bit wider than some of the other companies included on this list. Popular versions of their women’s bags are the Deva 60

packs. They have a range of smaller packs as well (such as the Amber 44

) if that’s what you’re looking for. 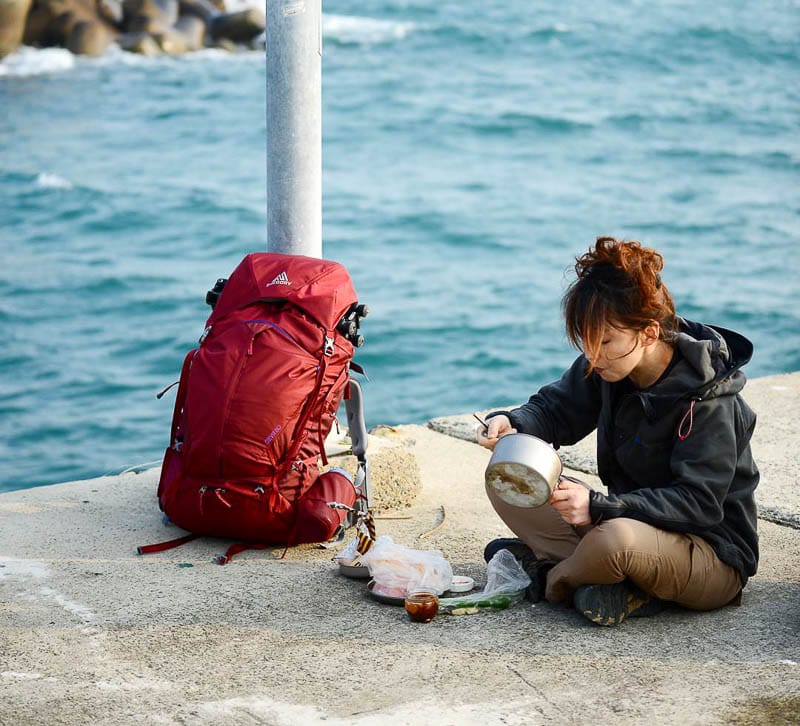 This is the category that I fall into. Now, when I first got shopping for bags, I had heard all about how awesome Osprey bags were, and I really thought that was the kind of bag that I’d end up with. But every time I tried on an Osprey bag, it felt like it sat either too low on my hips or else resting up above my shoulders! So instead, I tried on an REI store-brand backpack, the Venus 70L, and I fell in love with it. As mentioned, I’ve since downsized to a 40L pack…but wouldn’t you know, it’s also REI brand! So if you have a short torso and wide hips, I definitely recommend you check out REI’s Trail 40

or Trail 65 packs, depending on how much capacity you need.

If you’re from outside the US, you might have a difficult time tracking down one of their bags to try at your local store (although you may still be able to purchase the bag you want online). However, another good alternative is the Deuter ACT Lite 45+10 pack

—but unfortunately, this is a top-loading pack, although it does have a separate bottom compartment where I suppose you could store more of the things that you need often, as long as you aren’t carrying a sleeping bag or dirty shoes with you. 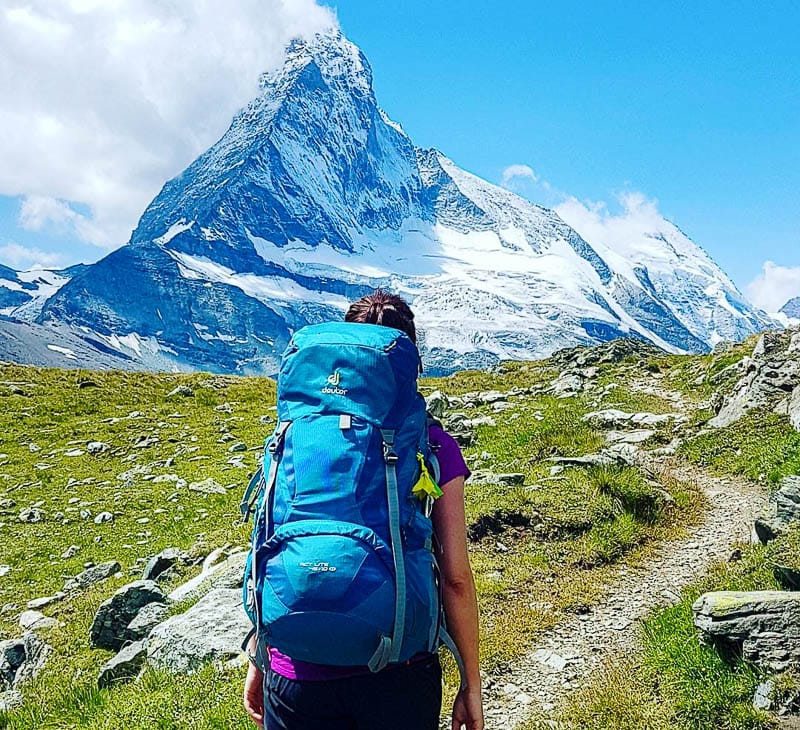 On the opposite end of the spectrum from me are the gals with longer torsos. Of course, if you have narrow hips, it could be that men’s packs are the best way to go for you. But if you have average to wide hips, these may still feel a bit uncomfortable since the shoulder straps will be more wide-set and they’ll load the majority of the weight in your bag into your shoulders rather than your hips.

That said, many packs—especially larger-capacity packs—have the ability to be modified at least a little bit for height differences by velcroing the shoulder straps into a different location on the back panel of the bag. Granite Gear’s Crown2 60 is a great choice which is adjustable for torso lengths up to 21 inches, or the High Peak Everest 50+10 (which has a removable 10L fanny pack, for those of you looking for a smaller-capacity bag) is also adjustable for longer torso lengths.

This is, of course, not a comprehensive list of all the bags out there, and again, I can’t stress enough the importance of going to a local shop and trying out bags before you purchase one! Is your favorite bag missing from the list? Share your expertise in the Comments section!